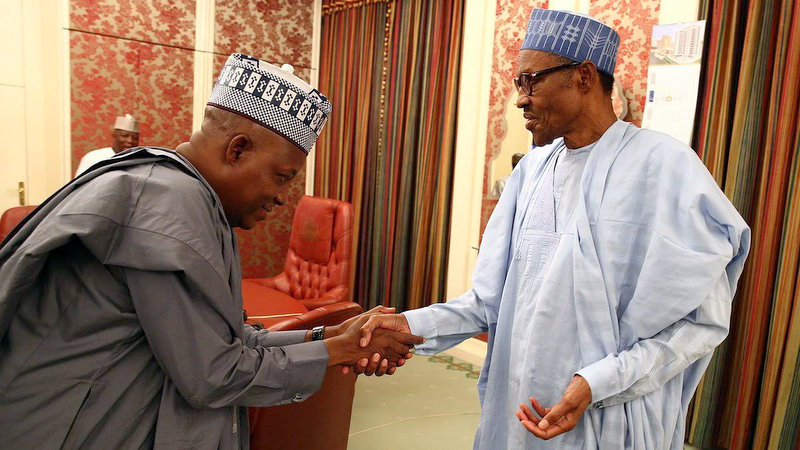 Former Governor of Borno State, Senator Kashim Shettima has told Nigerians to stop demonizing President Buhari over the rising insecurity witnessed across the nation.  Speaking to newsmen after the plenary at the National Assembly on Thursday February 13, Shettima stated that grandstanding, playing to the gallery, pouring venom on the presidency will not solve the problem. He also recalled how President Buhari has strategically placed the Northeast region through the establishment of North East Development Commission and discovery of oil.  The Senator said;  “Let’s see to it that the challenges facing us as a nation and as a people are promptly addressed, and it is not beyond us to solve those challenges.“I believe quite frankly that grandstanding, playing to the gallery, pouring venom on the presidency will not solve the problem.“We cannot just demonise Buhari, Buhari did his best, and we had a respite between 2015 and 2017, before we had this recent relapse.“So, how to find solution to our problem is more important than demonising anybody, and we shouldn’t suffer from memory amnesia, Buhari has done more than enough for the Northeast.“The Chief of Army Staff is not from Delta, neither is he from Akwa Ibom, the Chief of Army Staff is from Borno, the National Security adviser is from Borno, the Chief of Air staff from Bauchi, all from the Northeast.“Buhari was instrumental to the creation of the North East Development Commission, and now we have bills, motions coming from all parts of the country agitating for their own commissions as well.“It was under his tutelage that oil, million barrels of oil was discovered in the Northeast, Bauchi, so we have to give it to him, for placing our people in strategic positions to find solutions to our common challenges." Senator Kasshim added that fighting insurgency is a collective responsibility as he called for the adoption of a holistic approach encompassing the military, economic, social and political in the war against terrorism.  He said;  “Fighting insurgency is a collective responsibility for all of us; it is a complex composite and interwoven challenge and it is not something that you can solve only through military option.“We have to adopt a holistic approach encompassing the military, economic, social and political; beneath the mayhem of Boko Haram, underneath the barbarism lays the real cause, which is extreme poverty.“In the Lake Chad region, there is an incestuous relationship between the economy, ecology and climate change and the most pertinent aspect apart from the desecration, is the shrinking of the Lake Chad from 25,000 to less than 2,000 sq km.“We have challenges of population growth, and by 2050, Nigeria will be the third most populous nation on earth surpassing the United States.“There will be 440 million Nigerians by 2050. I might not be around, I’m already 52 but you are going to be around. The most pertinent aspect of these statistics is that by 2050, 70 percent of Nigerians will live in the north.“With desertification, deforestation, endemic poverty, pervasive illiteracy, it is a recipe for disaster.“Unless, we wear our thinking caps as leaders, unless we coalesce into a single force and come up with robust platforms to transform the anticipated demographic hope into demographic dividends, it will be the demographic disaster that will consume all of us.“This is why I want to appeal to you, let’s work as a team, let’s work as a family, because the Nigeria we have now, sorry if it is to implode, where do we go? " On President Buhari getting booed in Maiduguri during a condelence visit on Wednesday February 12, Shettima stated that people's expectations “were over exaggerated”. According to him, many thought Buhari had a “magic wand.” Shettima said;  “The people of Borno love Buhari, maybe their expectations were over exaggerated. People thought he had a magic wand, he doesn’t have one, I believe it is a temporary hiccup,” he said.“The people of Borno, the people of the north-east still passionately love Buhari. Without the cooperation of the people of Borno, the Civilian JTF could not have come into being.“The people and the government of Borno are fully behind the President, are fully in support of our security establishment who have lost lives while serving the nation.”The post Stop demonizing Buhari over insecurity Senator Shettima tells Nigerians appeared first on Linda Ikeji Blog.
Source: http://www.lindaikejisblog.com/2020/2/stop-demonizing-buhari-over-insecurity-senator-shettima-tells-nigerians.html