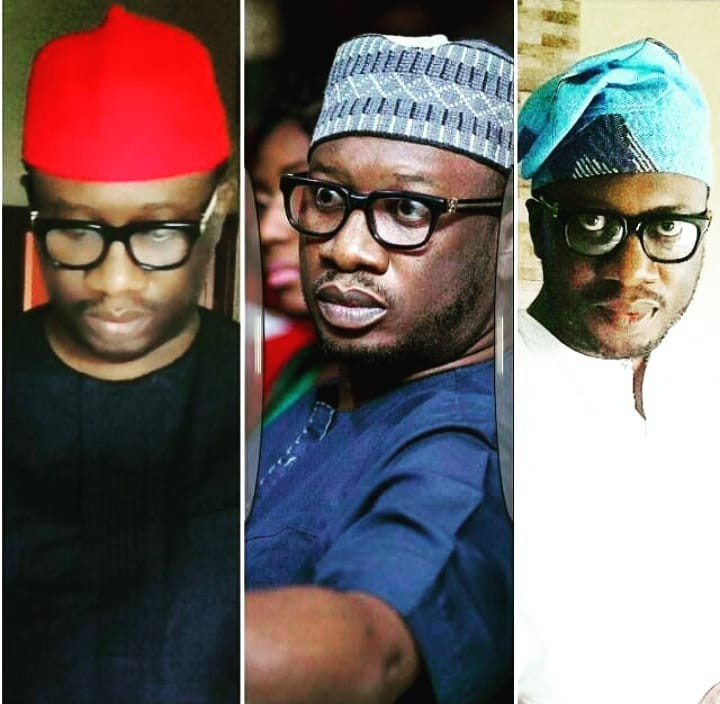 Media personality, Emmanuel Ugolee has responded to the accusations that he's tribalistic after he was called out for his viral post stating that most of the recognized Nigerian artists are from the Southwest. In his initial post, Emma said that most of the top artists are from the Southwest, despite the fact that there are artists from other parts of Nigeria doing great music. He mentioned some artists from other regions who are great but do not get half as much recognition as artists from the Southwest do (read here). His post got support from singer Etcetera who gave more examples of artists who deserve more buzz but do not get it because they are not from the Southwest. However, some Nigerians reacted to the post by accusing Emma and Etcetera of being tribalistic. Emma has now reacted. Sharing a photo collage of himself wearing the traditional attire of the three major tribes in Nigeria, he wrote" VerifiedSo I hear that in the online mass market I have been misconstrued as having a tribal streak over a recent post I made._I am not the kind to go explaining myself in any arena where emotions is the driver and logic, a conviently ignored passenger. You cannot successfully collide with that band wagon so I never bother._I however, worry about my fam here who deserve a cleared air for their support over the years._So for the records, I have never and would never see a persons creed or tribe before I see the persons heart._I got married to an amazing yoruba woman in 2013. On that day, my best man was Lanre Fassasi aka Sound Sultan. Who by the way is still my best friend in the whole world and whose folks until they passed, were my parents in Lagos. His siblings, are my siblings till date._My father who speaks yoruba, hausa and igbo still shames me for not haven't solidly added yoruba to the other two I speak fluently. So the first thing he says to me when I call is "Bawo" after which I try to impress him with how improved my yoruba is_I gave my soul to supporting countless acts in music at a time, a large chunk being from the southwest._I remember the viral flack I got from many music acts when I said Kizz Daniel's was the next 2face. I stood by words because I saw mad talent and longevity. I did not see a yoruba boy._Until he passed on, I was what you would call a "godson" to Pa Olugbebi._So for the 1st time in 44years, it is shocking to both me and all who know more than just my name, to have anyone even remotely insinuate that I see tribe._As a trained journalist, I simply made an observation and asked an intelligent question based on blinding statistics. Asking why in the last 10 years unlike the Nigeria I know, national music superstars have become region sensitive. What changed? Logical, intelligent answers still at large._I practice a religion that seriously frowns on taking tribal stands as God too is blind to it._So I sincerely apologize if anyone has misunderstood my quest (A quest that is still valid) for an explanation, over a growing anomaly, as being tribalistic. It is not who I am and would NEVER be._Emma Ugolee. 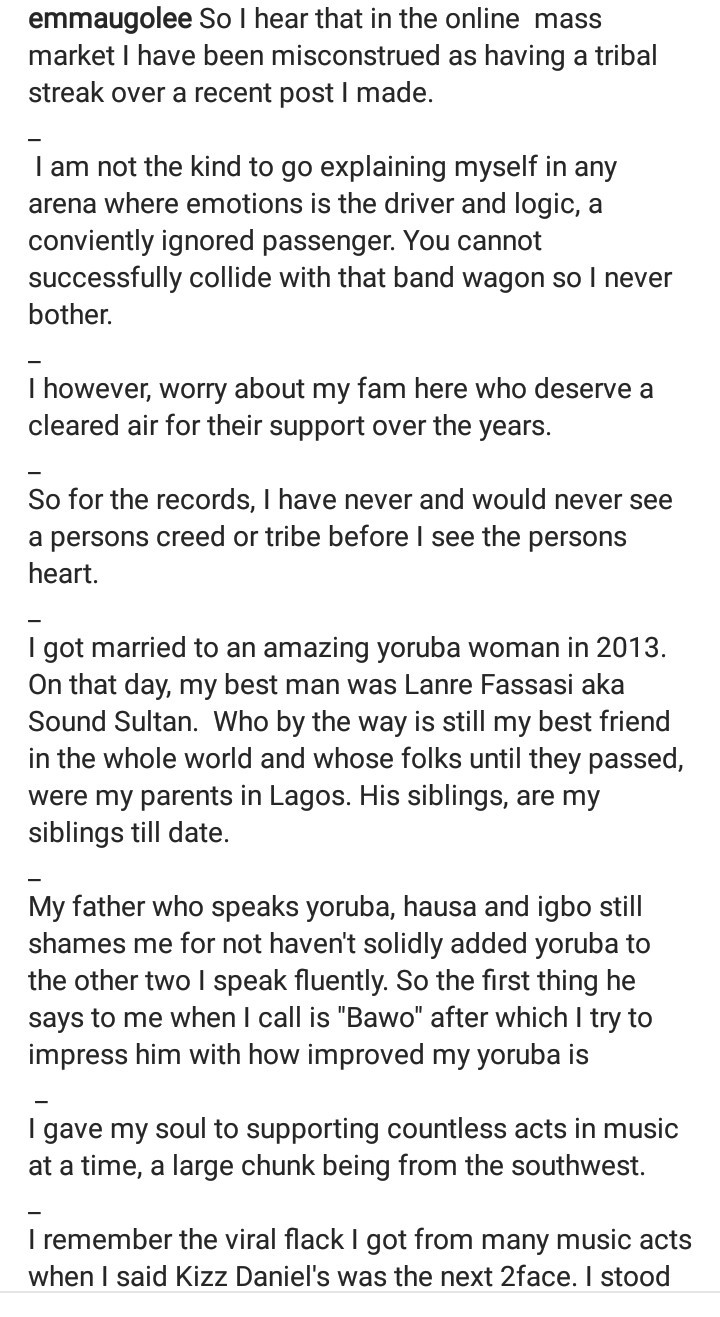 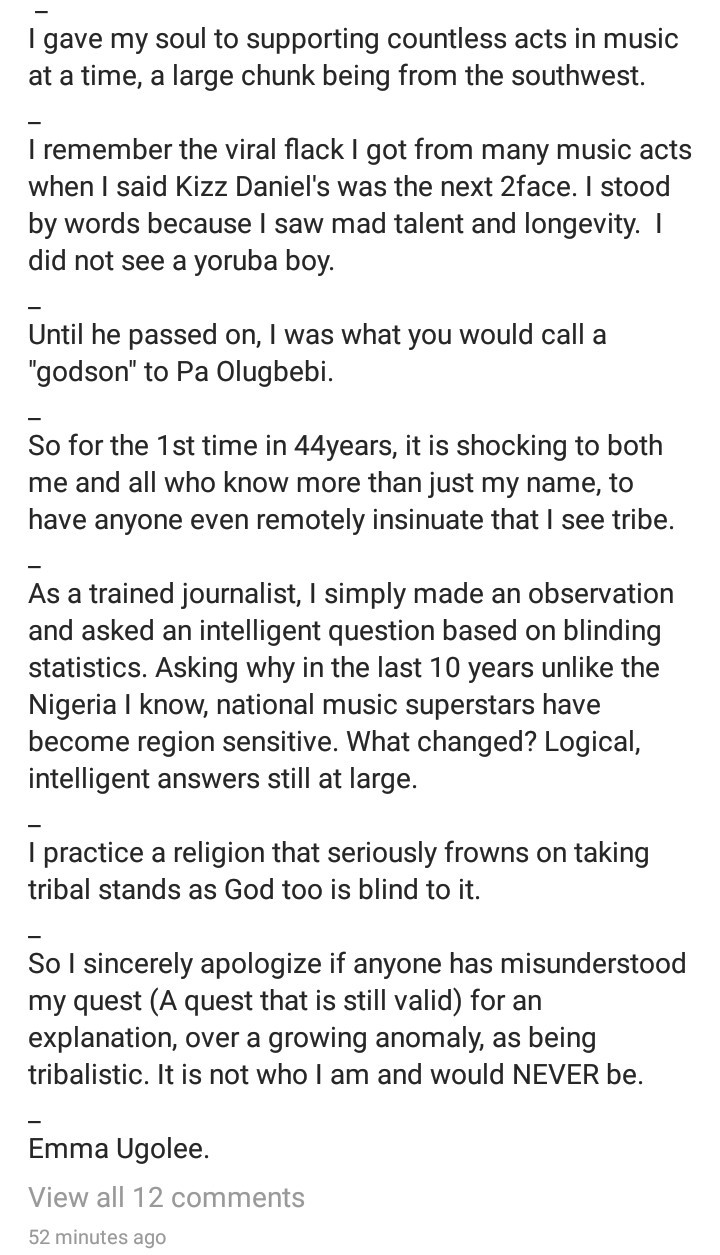 The post Emma Ugolee responds to accusations that he’s a tribalist after his viral post questioning why it is mostly artists from the Southwest who get recognized appeared first on Linda Ikeji Blog.
Source: http://www.lindaikejisblog.com/2020/2/emma-ugolee-responds-to-accusations-that-hes-a-tribalist-after-his-viral-post-questioning-why-it-is-mostly-artists-from-the-southwest-who-get-recognized.html