Nigerian police reacts as Netherlands-based Nigerian, who returned for the holidays, accuses SARS of extortion 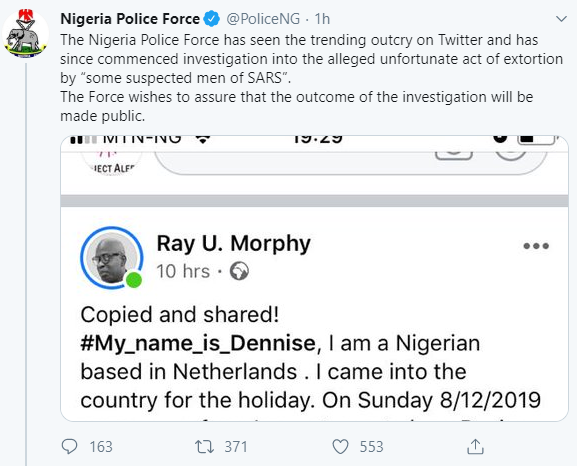 The Nigerian police has reacted after a Netherlands-based Nigerian, who returned home for the holidays, accused SARS of extortion. The returnee shared a screenshot of his bank transactions to show that 500,000 Naira had been transferred to the men alleged to be SARS officials and an additional 100,000 Naira cash was taken from him, making it a total of 600, 000 Naira (read here). The Nigerian Police Force reacted on Twitter, writing: "The Nigeria Police Force has seen the trending outcry on Twitter and has since commenced investigation into the alleged unfortunate act of extortion by “some suspected men of SARS”. The Force wishes to assure that the outcome of the investigation will be made public."