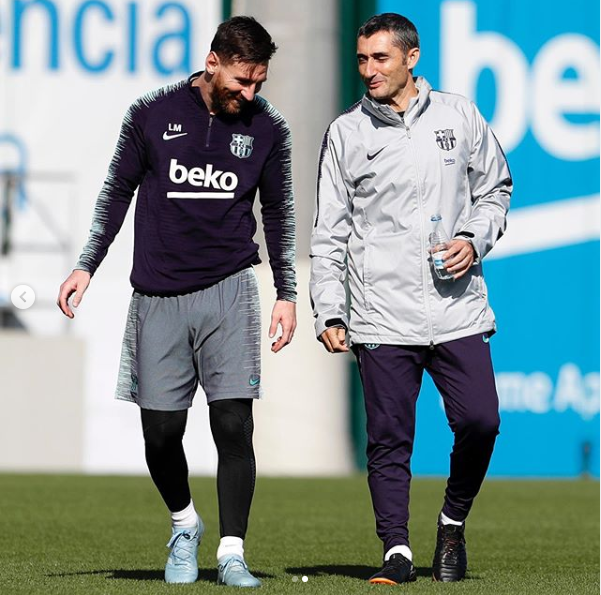 Sacked Barcelona coach, Ernesto Valverde has publicly thanked the club's president Josep Maria Bartomeu and fans shortly after he was sacked. Despite winning back-to-back league titles and guarding Barcelona to the top of La Liga Table, Valverde was dismissed on Monday following the club's Spanish Super Cup semi-final 3 – 2 defeat to Atletico Madrid last week.  He has been replaced with former Real Betis coach, Quique Setien, who has signed a contract to be with Barcelona until June 2022. In an open letter to the club's supporters, posted on Barcelona's official website, Valverde said: "My time as FC Barcelona coach has come to an end. It has been an intense two and a half years right from the start. "In that time I have enjoyed some joyful moments celebrating victories and trophies but also others that have been tough and difficult. "However, above all I would like to highlight my experience with the fans and the affection showed towards me during my time as coach. "I would like to thank the president Josep Maria Bartomeu and the Board of Directors for giving me the opportunity to coach the first team and their confidence during all this time. "I would also like to thank all the people I have worked with at the Club for their support and how they treated me during the two and a half seasons, especially those who work in and around the first team and with whom I have shared so many moments at the Ciutat Esportiva and during away trips. "Of course, I would like to thank the players for all their efforts that have allowed us to claim four trophies together. From this day, I wish them all the luck in the world and to the new coach Quique Setién also. "All the best to everyone. Visca Barça and Visca Catalonia." Barcelona's Captain, Lionel Messi also took to Instagram to pen a heartfelt note to Ernesto Valverde.  Sharing photos of them chatting on the pitch, the Argentine star wrote:'Thanks for everything, mister. I'm sure you'll go great wherever you go because, besides being a great professional, you're a magnificent person. Good luck and a big hug.       View this post on Instagram         Gracias por todo, míster. Seguro que te irá genial allá donde vayas porque, además de ser un gran profesional, sos una magnífica persona. Mucha suerte y un abrazo grande.A post shared by Leo Messi (@leomessi) on Jan 14, 2020 at 5:14am PSTThe post Sacked Barcelona coach Ernesto Valverde sends emotional farewell message to fans as Lionel Messi pays tribute to him appeared first on Linda Ikeji Blog.
Source: http://www.lindaikejisblog.com/2020/1/sacked-barcelona-coach-ernesto-valverde-sends-emotional-farewell-message-to-fans-as-lionel-messi-pays-tribute-to-him.html