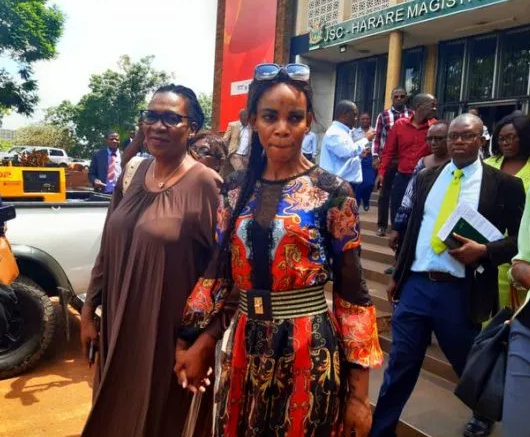 Mary Chiwenga, estranged wife of Zimbabwe’s Vice President Constantino Chiwenga, who was arrested on Saturday, has been charged in a Harare court with his attempted murder, in a surprising turn of events.   The woman was initially held on suspicion of money laundering. She also faces a complaint of forgery by her ex-husband, a former footballer. But in a surprising turn of events, Mary, the ex-model, whose husband, the former military general had suspected of poisoning him, leading to long medical care in South Africa and China, made startling complaints in court documents today, that she actually tried to kill him while in hospital, by unplugging the life support tubes. His complaint formed the kernel of the attempted murder charge against her today.  She was denied bail by the magistrate, with the court ordering that she be remanded in custody till February 2020, according to iharare.comThe criminal complaint against Mary, nee Mubaiwa:ATTEMPTED MURDER AS DEFINED IN SECTION 189 ARW SECTION 47 OF THE CRIMINAL LAW (CODIFICATION AND REFORM) ACT, CHAPTER 9:231. The complainant is the Vice President of Zimbabwe Comrade Constantino Guvheya Dominic Nyikadzino Chiwenga.2. Accused Marry Mubaiwa is estranged wife of the complainant.3. On 22 June 2019, the complainant was airlifted to South Africa for emergency medical attention however upon arrival, the accused forced the complainant to stay at Sheraton Hotel in Pretoria for 24 hours.4. On 23 June 2019, accused kept on denying complainant access to medical treatment and the security team had to force their way to take the complainant to Netcare hospital.5. Upon his admission at the hospital, the complainant was inserted with Intra Venous Giving Set as well as Central Venous Catheter in order to sustain his life. Some weeks later, the complainant was transferred to a private Ward where he was under 24-hour monitoring by doctors and his securitypersonnel.6. During this time when the complainant was admitted at the hospital, he was helpless and would rely on medical staff and the security personnel whenever he was moving from one point to the other.7. On 8 July 2019, at about 2000 hours, the accused came to the hospital with the intent to cause serious harm to the complainant. She ordered the security personnel to excuse her alleging that she wanted privacy with the complainant. The security personnel went outside leaving the accusedtogether with the complainant inside the ward.8. Whilst alone with the complainant accused unlawfully removed the medical Intra Venous Giving Set as well as Central Venous Catheter which were inserted to the complainant and the complainant started bleeding profusely.9. The accused forced the complainant off the bed, held him by hand and moved out from the ward before being intercepted by the security personnel at the exit door. The hospital staff was called by the security personnel and they reconnected the Intra Venous Giving Set and the Central VenousCatheter and resuscitated the condition of the complainant.10. The accused disappeared from the hospital after the hospital staff was alerted by the security personnel.11. The accused had no right whatsoever to act in the manner she did.The post Update: Mary Chiwenga, Zimbabwe VPs wife charged with his ‘attempted murder’ appeared first on Linda Ikeji Blog.
Source: http://www.lindaikejisblog.com/2019/12/update-mary-chiwenga-zimbabwe-vps-wife-charged-with-his-attempted-murder.html