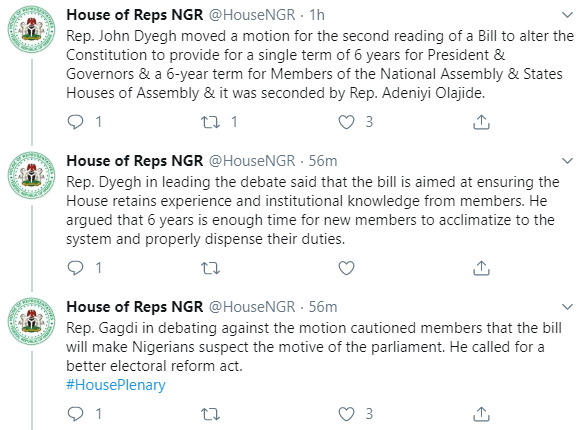 The Nigerian house of representatives has rejected a bill seeking to provide for a single term of six years for the president and governors. The constitutional amendment bill seeks to also provide for an unlimited tenure of six years for members of the national assembly and state houses of assembly.   The bill, sponsored by John Dyegh from Benue state, was rejected after it was called up for second reading at Tuesday’s plenary session. During the debate on the bill, most of the lawmakers kicked against it, arguing that there is nothing wrong with the system Nigeria currently operates.   But a few lawmakers including Sergius Ogun from Edo state argued it would save the country the funds used to conduct elections every four years.  “This bill intends to also save the money being spent in elections for second term. It will save this country and our democracy,” Ogun said.   Henry Archibong from Akwa Ibom state said the focus should be on improving Nigeria’s electoral process and not on the number of terms an elected officer stays in office. “How can we make electoral processes and elections credible and less expensive,” he asked. “This is the issue we ought to address and not the number of terms.   Yusuf Gagdi from Plateau state concurred with him, and said there is nothing wrong with the current system of four-year tenure with a limit of two tenures for the executive. He said in an ideal democracy, “you cannot ask the president to perform a six year tenure and expect a good performance”.  “Our problem is our inability to respect our rules. Our democracy does not need six year single term for the executive,” he said.“What it needs it to maintain what is in place for the executive and national assembly. What we need is to improve our elections and ensure we have a system that will not fail Nigerians. It is not the time to say we will amend the tenure of the executive and the national assembly members.”  Haruna Bello from Kano state also kicked against the bill, saying it will fuel the speculation of tenure extension for President Muhammadu Buhari.  “There is a speculation for tenure extension for the president. Brining this motion now will make our adversaries think this is an attempt to achieve that,” he said. “By the time you allow the room for six years, you will shut down the door for appraisal of someone’s term after four years. We should maintain our four years.”  The bill was subsequently voted against when Idris Wase, deputy speaker, who presided over the session, put it up for vote for second reading.The post Breaking: Nigerian House Of Reps reject bill seeking six-year single term tenure for president, governors appeared first on Linda Ikeji Blog.
Source: http://www.lindaikejisblog.com/2019/12/breaking-nigerian-house-of-reps-reject-bill-seeking-six-year-single-term-tenure-for-president-governors.html