Only 42,000 doctors out of the 75,000 registered by Nigeria Medical AssociationÂ are available for Nigeriaâs 200 million people – New Report 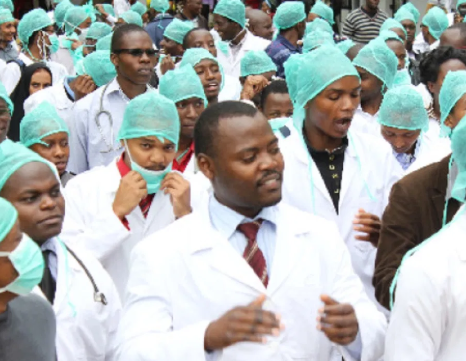 Only 42,000 doctors out of the 75,000 registered by the Nigeria Medical Association (NMA) are available for Nigeria’s 200 million people, the association’s President Francis Faduyile has revealed.   The 33,000 missing, he said, have left for greener pastures, adding that Nigeria has one of the worst health indices in the world. According to a report by ThisDay, Faduyile attributed the emigration of Nigerian doctors to high rate of insecurity, poor job satisfaction, low remuneration, unemployment, bad roads, and poor healthcare system. Faduyile painted a grim picture of the collapsed health care system:“In rural areas, we have one doctor to 22,000 people, while in towns and cities, we have one doctor to 10,000 Nigerians or one doctor to 12,000 Nigerians, whereas the World Health Organisation (WHO) said for any country to have a balanced ratio, it must have one doctor to 600 persons.  “Nigerian doctors and other healthcare workers, including nurses and pharmacists, are leaving the country in droves because of the poor healthcare system and lack of job satisfaction.  “The United Kingdom employs, on the average, 12 Nigerian doctors every week. If Nigeria decides to graduate 3,000 doctors every year, without the doctors leaving this country, it will take us 25 years to meet the WHO estimate of one doctor to 600 persons,” he said.The NMA president said: “Nigeria is losing some of its most educated, talented and professional healthcare practitioners to countries such as Namibia, Senegal, Ghana, UK, South Africa and many others.“This is because the government is not interested in giving adequate priority to health, low funding, no appropriate employment, low remuneration, lack of equipment to intervene and save lives, insecurity, bad roads, among other problems.    “Now, it is taking a toll on the country as our people are suffering due to the shortage of workers, people are dying due to lack of effective healthcare system and Nigeria has one of the worst health indices in the world,” he said.The post Only 42,000 doctors out of the 75,000 registered by Nigeria Medical Associationare available for Nigerias 200 million people – New Report appeared first on Linda Ikeji Blog.
Source: http://www.lindaikejisblog.com/2019/12/only-42000-doctors-out-of-the-75000-registered-by-nigeria-medical-association-are-available-for-nigerias-200-million-people-new-report.html

Previous What I ordered Vs What I got: Nigerian lady left disappointed after the leather skirt she ordered was deilvered
Next “Fela died after being injected with poisonous substance in NDLEA custody” Dede Mabiaku says in shocking interview