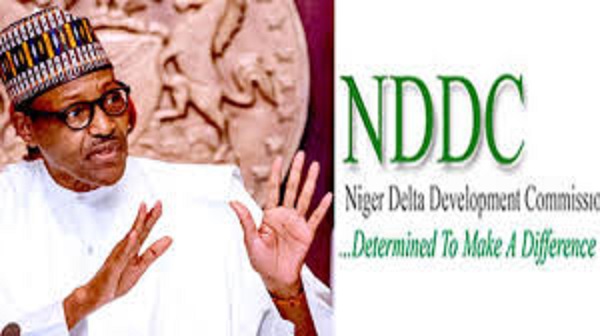 Niger Delta Integrity Group (NDIG) has charged President Muhammadu Buhari to inaugurate a substantive board for the Niger Delta Development Commission (NDDC) which was confirmed by the Senate since 2019.

The group in a statement signed by President, Comrade Akpoebide Okotiene and the Secretary, Mr Edet Ekpenyong noted that the President’s delay in inaugurating the board is creating tension in the region.

Our attention has been drawn to reports in the national media that President Muhammadu Buhari has again announced that the board for the Niger Delta Development Commission (NDDC) will soon be inaugurated. According to The Cable Online Newspaper, he said this on Thursday, July 28, 2022 while declaring open a retreat for management of the ministry of Niger Delta affairs and NDDC at the state house banquet hall, Presidential villa, Aso Rock, Abuja.

President Buhari has therefore restated his commitment to end the ongoing illegal sole administratorship at the NDDC and inaugurate the Board of the Commission in compliance with the law. He had earlier made a commitment to the nation on June 24, 2021 when he received the leadership of Ijaw National Congress (INC) in Aso Rock, Abuja. The President said: ‘‘Based on the mismanagement that had previously bedeviled the NDDC, a forensic audit was set up and the result is expected by the end of July, 2021. I want to assure you that as soon as the forensic audit report is submitted and accepted, the NDDC Board will be inaugurated.” The Forensic audit report has been submitted to President Muhammadu Buhari since eleven months ago, on September 2, 2021. Regrettably, the NDDC which is the foremost Niger Delta regional development agency and which was set up to right the wrongs in the Niger Delta is still being run by a sole administrator appointed in breach of the NDDC Act.

President Muhamnadu Buhari had forwarded to the Senate for confirmation appointment of a board of the Niger Delta Development Commission (NDDC) via a letter dated 18th October, 2019.

The president’s letter personally signed by him reads: “In accordance with the provision of Section 2(2)(a) of the Niger Delta Development Commission (NDDC) (Establishment) Act, 2000, I write to forward, for confirmation by the Senate of the Federal Republic of Nigeria, the under listed nominees for appointment into the NDDC board, to occupy the positions indicated against their names.” President Buhari, in the letter, expressed hope that “the Senate will consider and confirm the nominees in the usual expeditious manner”.

Accordingly, the written request, which was read on the floor of the Senate on Tuesday, October 22, 2019 by its President, Ahmad Lawan, was given expeditious consideration by the upper legislative chamber, which directed its standing committee on NDDC, to carry out screening exercise on all the nominees and report back within a week.

The Senate’s standing committee carried out the screening exercise on 15 out of the 16 nominees on Thursday, October 31, 2019, upon which the Senate in Plenary confirmed their appointments on November 5, 2019.

However, after the nominees were screened and confirmed by the Nigerian Senate on the 5th of November 2019, President Buhari asked that the inauguration of the Board should be put on hold pending the completion of the forensic audit, for which an Interim Management Committee was appointed for the NDDC.  The Forensic audit report has been submitted to President Muhammadu Buhari since eleven months ago, on September 2, 2021. Regrettably, the NDDC which is the foremost Niger Delta regional development agency and which was set up to right the wrongs in the Niger Delta is still being run by a sole administrator appointed in breach of the NDDC Act.

President Muhammadu Buhari has already nominated a Board for the NDDC in October 2019 whose members were vetted by all relevant agencies of the federal government following which they were screened and confirmed by the Nigerian Senate on November 5 2019. They are only now waiting to be inaugurated. Mr President has restated his intention to inaugurate the Board on the completion of the forensic audit, which commitment he restated on Thursday, July 28, 2022 while declaring open a retreat for management of the ministry of Niger Delta affairs and NDDC at the state house banquet hall, Presidential villa, Aso Rock, Abuja.

We therefore urge President Buhari to inaugurate the board and management of the Commission, in compliance with the law to ensure that the nine constituent states of the region will have fair and equitable representation in the Commission in line with the Act of the National Assembly 2000 which brought the interventionist agency into existence and made it mandatory for the President to appoint a board and management for the Commission, subject to confirmation by the Senate.

We align with other authentic stakeholders to restate that the preservation of a sole administrator or an interim administration in the management of the Commission is not only a breach of the NDDC Act 2000 but an affront on the long-deprived people of the region who have had to endure three years of the foremost agency being arbitrarily run in breach of the law – the NDDC Act and in utter disregard of their need and the region’s development.

We also wish to remind President Buhari, the Federal Government, and indeed the ruling All Progressives Congress (APC) that the continued administration of the NDDC by a sole administrator is illegal because the NDDC Act has no provision for this illegality as the NDDC Act only provides that the Board and Management of the NDDC at any point in time should follow the provisions of the law which states that the Board and management is to be appointed by the President, subject to confirmation by the Senate. In effect, nobody is supposed to begin to administer the NDDC and utilise the huge funds accruing to it on a monthly basis without passing through this legal requirement as stipulated in the NDDC Act.
We also remind President Buhari and the Federal Government that whereas the North East Development Commission (NEDC) has been allowed to function with its duly inaugurated board (since May 2019) in line with the NEDC Act, thereby guaranteeing proper corporate governance, accountability, checks and balances, and fair representation of its constituent states, the NDDC on the other hand has been arbitrarily managed in the past three years by interim administrations/sole administrator, in flagrant violation of the law establishing the Commission.

As stakeholders in the Niger Delta region we align with other credible voices in the region to emphasise that the Federal Government, President Buhari, and indeed the ruling All Progressives Congress (APC), should be concerned about the disdain of the Niger Delta people over the manner the NDDC has been handled, most especially administering the Commission with illegal interim managements/sole administrator contraptions for five years in this administration’s seven years in office, and therefore needs to end the ongoing illegality in NDDC if this government is to be remembered for good in the Niger Delta.

All stakeholders are now awaiting the earnest inauguration of the NDDC Board appointed by the President and confirmed by the Senate since November 2019 in line with the NDDC Act to ensure fair representation of the nine constituent states, accountability in the utilisation of the NDDC funds, checks and balances and due process in the administration of the Commission.”

Apostle Igiehon urges CAN fish out fake elements within their ranks