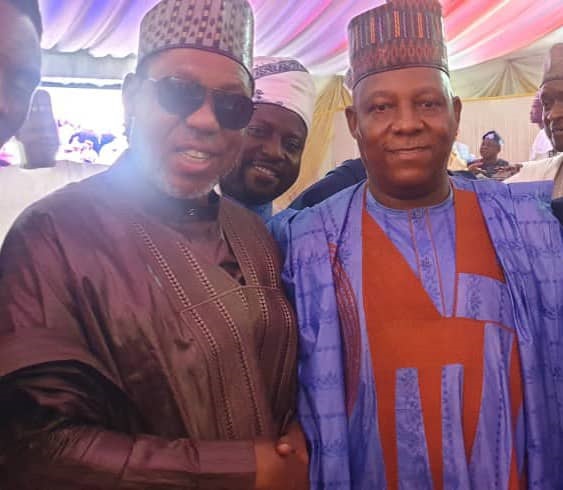 …Says Tinubu/Shettima is driven by competence, not religious agenda

The immediate past State Chairman of the All Progressives Congress, APC Delta State, Prophet Jones Ode Erue has stated that the Delta State APC is firmly behind the Tinubu/Shettima presidential ticket all the way to a resounding electoral victory come 2023 elections.

The former State Chairman stated this over the weekend at the marriage of Fatiha the daughter of the All Progressives Congress Vice Presidential candidate, Senator Kashim Shettima, in Maiduguri, where he was a special guest of the former Borno State Governor.

Speaking to reporters at the occasion which was graced by governors of the Party led by the Chairman of the Progressives Governors Forum and the Governor of Kebbi State Abubakar Atiku Bagudu as well as other big wigs of the Party and dignitaries from all walks of life, Prophet Erue reiterated the commitment of the Delta State APC in working with other relevant stakeholders nationwide to deliver the Tinubu/Shettima presidential ticket.

According to him; “The truth must be said that Delta State APC is highly committed to delivering the Tinubu/Shettima ticket in the State on the next presidential election. The Party is presently mobilizing not just members, but Deltans, in general, to vote massively for the presidential candidate of our great Party. I firmly believe that the Tinubu/Shettima is a ticket that is highly capable of moving the country to the next level of economic growth that is desperately needed right now “.

Prophet Jones Ode Erue, who was the pioneer State Chairman of the APC in Delta State, is now the National Coordinator of the Progressives Christians For Tinubu-Shettima, the Coordinator of Niger Delta Christian Ministers, which is an amalgam of various Christian groups in the Niger Delta region, and also the Delta State Coordinator of BATS ( Bola Ahmed Tinubu Solidarity) that is dedicated to sensitizing the people of the region of the benefits of voting for the Tinubu/Shettima ticket, further assured that no amount of blackmail or innuendo being spread about the Muslim/Muslim ticket will be able to derail the people of the State and the South-South from voting the Tinubu/Shettima presidential ticket in the next general elections.