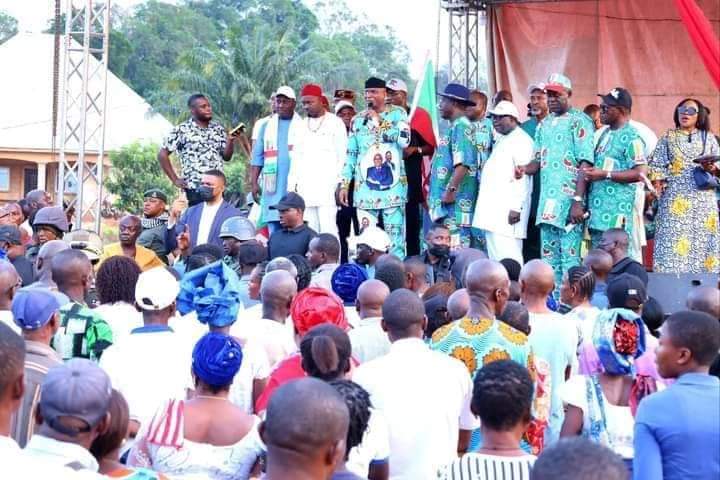 Delta State governorship candidate of the All Progressive Congress (APC), Senator Ovie Omo-Agege, on Wednesday, vowed to end 24 years of perennial darkness and infrastructural decay in Nsukwa and Ogwashi-Uku clans in Aniocha South Local Government Area of the State.

Omo-Agege said when elected, his administration would establish an independent power project at Ubu River Dam as part of measures in addressing the epileptic power supply in Delta North.

He also said his administration would address the infrastructural decay and absence of quality healthcare centers in Aniocha council area.

While appealing for votes for APC candidates in the 2023 general elections, the Delta Central lawmaker said the people of Delta North would benefit greatly from an APC-led Government both at the Federal and State levels.

The Governorship candidate of the APC, Senator Ovie Omo-Agege, who received a rousing welcome in the various Wards visited, told jubilant supporters in Aniocha South that when elected he would resolve the persistent water problem in the council area.

He disclosed that the Federal Government has completed the Ubu dam project in the council to ensure a portable water supply in the area.

The Deputy President of the Senate assured the people of Aniocha South that he would use his office to attract the establishment of a water treatment plant that would permanently solve the problem of portable water in Aniocha.

While urging the people of Delta North to support and reelect Senator Peter Nwaoboshi, he said that Delta State stands the best chance of producing the next President of The Senate being the most ranking APC Senator from the South-South.

He further stated that Delta would benefit more if it produce the next President of the Nigeria Senate because he would attract lots of development to the State.

“In 2015, Governor Okowa, who rose to power on the Anioma Agenda, promised prosperity for all Deltans but seven years later, Delta s are yet to see the prosperity he promised. Okowa administration failed The Anioma people and Deltan.

“It’s unimaginable that there are communities in Delta State, very close to the State Capital that is still in darkness for 24 years running.

“I am not here to lament the failure of the Okowa-led Government, but I am here to give the people of Aniocha and all Deltans the hope that the challenges we faced are solvable and I am here to assure you that an APC-led administration under my watch will address them.

“We have tried PDP in the past seven and half years but failed. Delta received so much but with little or nothing to show for it. This is why Deltans should change PDP for APC. We will bring you development. We will unite Deltans”. Omo-Agege stated.

Meanwhile, the traditional rulers of the Nsukwa clan in Aniocha South have decorated Omo-Agege and his deputy, Osanebi with Chieftaincy Titles.

The chieftaincy titles were conferred on Omo-Agege and Osanebi by His Royal Majesty, Obi (Dr.) Kenneth Ezegbunem 1, JP, Obi of Nsukwa Kingdom on behalf of other traditional rulers of Nsukwa Clan.

The titles were conferred on them when the APC Gubernatorial Campaign of Senator Omo-Agege visited the traditional rulers at the palace of Obi of Nsukwa Kingdom on Wednesday.

Omo-Agege, the Senator representing Delta Central at the National Assembly, was conferred with the traditional title of Nna-bu Enyi 1 (his father is an elephant) of the Nsukwa Clan, while his deputy governorship candidate, Rt. Hon. Osanebi was decorated as Ikemba (a reliable Warrior) of the Nsukwa Clan.

Ezegbunem 1, who led other monarchs in Nsukwa Clan to pray for the Delta Central lawmaker and his deputy, noted that the traditional titles were given as a reward for their achievements in lawmaking and appointing indigenes of the Clan as political aides.

Delta Central Senate: May We Not Choose Barabbas!