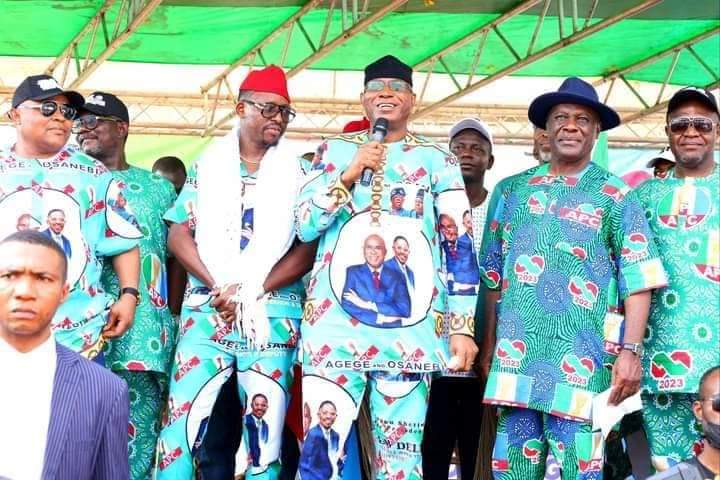 The All Progressive Congress (APC), Deputy Governorship candidate in Delta State, Rt. Hon. Friday Osanebi said that youths and women would benefit more from Senator Ovie Omo-Agege as the next Delta State Governor.

Osanebi, a former Deputy Speaker of the Delta State House of Assembly (DTHA), said Omo-Agege would attract human and capital development to Anioma nation and other parts of Delta State.

He stated this on Wednesday, while addressing a mammoth crowd of APC supporters during the Party’s Ward -to- Ward campaign to Aniocha South Local Government Area of the State.

The lawmaker representing Ndokwa East posited that Omo-Agege remains the best governorship candidate that would bring the desired transformation that Deltans are yearning for.

He said Omo-Agege has demonstrated his love for Delta youths by picking one of their own as Deputy, adding that Delta youths now have a chance to participate in decision makings.

Osanebi, therefore, urged Delta youths and women to come out enmass to vote for the Omo-Agege / Osanebi Ticket because it represents the best interest of Delta women and youths.

“Under Omo-Agege-led Government youths will be happy. Delta women will celebrate because they will be empowered and be part of the decision-making of an APC-led administration.

“I plead with Delta youths to consider their tomorrow and not to lose out on this golden opportunity that Omo-Agege/Osanebi Ticket has presented. If Deltans need development they should think and vote APC”. The APC Deputy Governorship candidate added.

Earlier, the Governorships candidate of the APC, Senator Ovie Omo-Agege, had told jubilant supporters in Aniocha South that when elected he would resolve the persistent water problem in the council area.

He disclosed that the Federal Government has completed the Ubu dam project in the council to ensure a portable water supply in the area.

The Deputy President of the Senate assured the people of Aniocha South that he would use his office to attract the establishment of a water treatment plant that would solve the problem of portable water in Aniocha.