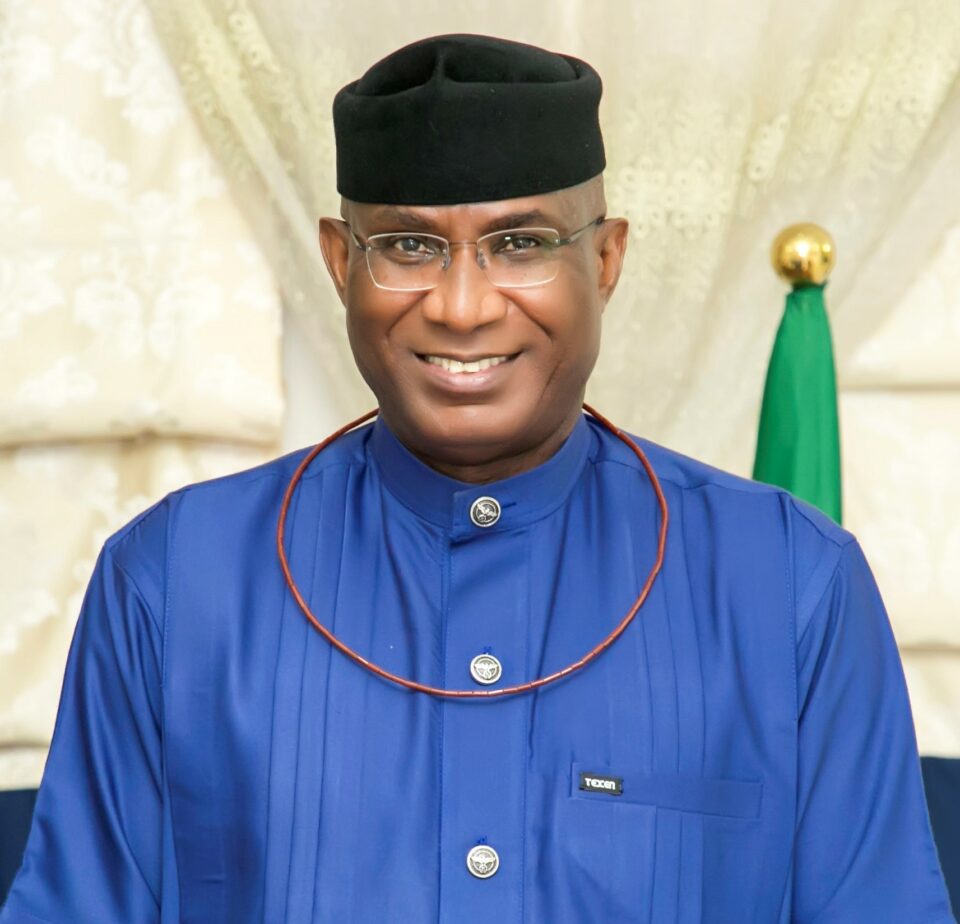 Delta State All Progressive Congress APC, Governorship Candidate and the Deputy President of the Senate, Obarisi Ovie Omo-Agege, on Thursday, accused Governor Ifeanyi Okowa of squandering money meant for the development of the state on his ‘ill-fated’ vice-presidential ambition.

Omo-Agege disclosed that Okowa for his selfish ambition is attempting to mortgage entire southern Nigeria turn for the presidency for his vice-presidential quest even when President Mohammadu Buhari and 14 Northern governors support a power shift to the South.

The APC governorship candidate who stated this at a world press conference at his campaign office at Asaba; decried a situation where the Okowa-led government have received over N2.8Trillion over the past seven years with little or nothing to show for it.

According to him, such ambition amounts to betrayal and selling of the political right of the people of South including governors who agreed that the position should be zoned to southern part of the country.

He emphasised a southern President in the person of a former Lagos State governor will succeed President Muhammadu Buhari in the 2023 general elections.

He also hinted that his administration is determined to ensure that there is socio-economic and infrastructural development in the state.

The Delta Central lawmaker spoke in Asaba at a world press conference organised ahead of the flag-off of his governorship campaign.

While taking swipe at Okowa, the Deputy President of the Senate said Deltans will reject an attempt by the PDP’s Vice Presidential candidate to foist his stooge and governorship candidate of the PDP as the next governor of the state.

He said Governor Okowa, rather than use Delta resources in the development of the state, was busy funding his “failed presidential ambition” with the commonwealth of Deltans.

Omo-Agege assured that the state will witness rapid socio-economic development and embark vigorously on infrastructural development across the state in the riverine areas.

He said, “While other States in the Niger Delta and elsewhere are celebrating shiny milestones in infrastructural development, human capacity development, healthcare, education, sustainable economic development, good governance, and improved institutions, the people of Delta State are shell-shocked; benumbed by the sheer audacity of Okowa and his co-travellers as they daily bring the state to its knees. Even sadder is the fact that the governor has been going around borrowing with reckless abandon, making the State one of the most indebted in Nigeria even with its monumental FAAC allocation and 13% derivation revenue as an oil-producing State.

“Today, there are strong reasons to believe that monies meant for the development of Delta State are now being channelled to fund the ill-fated ambition of Governor Okowa to become Vice-President of Nigeria in 2023 by every means. Just go around the State. The poverty and frustration inflicted by this government on Deltans over the years are palpable and scary. Insecurity, low-quality projects, lack of vision to revive the economy of the State, misplaced priorities in governance, corruption, nepotism, government waste, incompetence, and lack of accountability are pervasive and profound.

“We surely can do better than our label as the “Keke” capital of Nigeria because of what this government has done, and even more, failed to do. The new slogan today is “see Delta and cry”-from Delta North to South and Central, tears come to your eyes. We have now come to that time in the history of Delta State when all Deltans must rise in one accord and boldly declare that enough is enough by voting for the APC.

“The handpicked PDP candidate Rt. Hon. Sheriff Francis Oborevwori is a mere clone of Okowa because, like his master, his middle name is incompetence. By his background, or the lack thereof; and public record, or the lack thereof, the PDP candidate would be a human disaster in Government House. His nomination, championed by an inept and corrupt PDP administration, is an insult to the sensibilities of Deltans. Delta State should not leave its destiny in the hands of a man who has no mind of his own and will continue to be Okowa’s stooge even as governor.”

While speaking on his plans for Deltans, Omo-Agege stated, “Our vision for a New Delta is driven by the desire to arrest receding hope among Deltans and build a State where the people’s future is brighter than their past. We are aware that our people are seriously worried about the unemployment indices, which are heading skywards as evidenced by the high percentage of our youths roaming the streets for jobs that do not exist but certainly can be created if we have a government that fosters the right synergy with the private sector to boost employment.

“I will address our scary unemployment rate by giving priority to public investment in agriculture and tech-driven entrepreneurship. My plan as stated in our manifesto will change the commercial ecosystem of the State and create an investment-friendly charter that makes access to funds and infrastructure a natural way of life. Human capital development, agriculture, tourism, infrastructure, housing and other labour-intensive interventions will be at the core of our agenda.

“I will address our scary unemployment rate by giving priority to public investment in agriculture and tech-driven entrepreneurship. My plan as stated in our manifesto will change the commercial ecosystem of the State and create an investment-friendly charter that makes access to funds and infrastructure a natural way of life. Human capital development, agriculture, tourism, infrastructure, housing and other labour-intensive interventions will be at the core of our agenda.

“We shall establish a Delta State Employment, Entrepreneurship and Empowerment Programme (DEEP), and facilitate the establishment of cluster industries in each of the twenty-five Local Government Areas of our State. We will deliberately create an enabling environment for industries and manufacturing; establish tech hubs, set up small business loan guarantee schemes, promote skills acquisition and set up a Career Development Centre for Deltans.

“As part of our plans to promote ease of doing business, we will undertake institutional and process reviews, remove red tape and bureaucratic bottlenecks, improve infrastructure, and re-engineer our peace and security strategies while establishing a one-stop repository of business knowledge and information. We will guarantee the rights of women and invest their unique energy to drive social and economic development in the state. We will initiate a youth development program that moves them away from the hopelessness of today, connect them to creative endeavours and generate energy for honourable work.

“We will make aggressive investments in modern infrastructure capable of opening up the total economic energies of our people, we will lift the State out of a mono-economic dependency by launching diversification into tech and business incubation. We are deeply committed to the cause of changing the current development path of our State. However, we cannot do it without the support and cooperation of our people. Democracy and development thrive on a watchful and active citizenry who should hold us accountable every step of the way.”