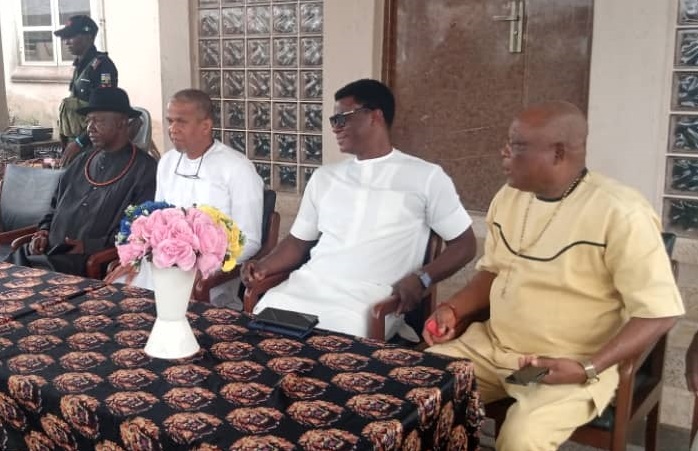 Delta Central Senatorial Candidate of the All Progressives Congress, APC, Chief Ede Dafinone, on Monday reassured the family and political associates of late Senator Pius Ehwerido that his contributions as one of the founding fathers of APC would not be forgotten.

The Senatorial hopeful stated this when he visited and met with Late Senator Pius Ehwerido’s family and APC Ewhu Ward 1 at the country home of the Late Senator Ewherido.

The visit which coincided with the 9th anniversary of Late Senator Pius Ehwerido’s death, according to Chief Dafinone was a mark of honour to the memory of the late Senator.

Delta Central APC Senatorial Candidate, who was accompanied by his Campaign Director, Chief Barr. Adelabu Bodjor and some of his supporters were received by family members, APC supporters, and friends of the Ewherido urged them to remain steadfast in the task of rebuilding Delta, a dream the late Ewherido stood for.

He said the untimely exit of Senator Pius Ewherido somehow delayed the progress and development of Delta State, but, assured that in 2023, the progress that the late Senator Ewherido fought for, will be achieved through APC which has an assemblage of best candidates in the fort coming 2023 elections.

Dafinone, however, lamented the backwardness of Delta State in the area of infrastructure development and appealed to all APC faithful to stand firm to change the PDP-led state government for the better, adding that the state will experience growth, development and justice under APC leadership.

While thanking the party faithful, Dafinone also pledged his support to the Ewherido Political Network, stating that Late Chief Pius Ewherido was a guru in leadership. He said his presence was, first to honour late Pius Ewherido and second to identify with party faithful at the ward and unit level.

Responding, to the convener of the meeting, Hon. Emmanuel Ewherido expressed gratitude to those who make out time to attend the event despite the short notice.

He also stated the meeting was called to reenergize the Ewherido Political Network ahead of the 2023 elections, noting; “Having looked at all the candidates chosen, I discovered that they are all marketable materials who can deliver when elected, hence we must support all of them”.

Hon. Emmanuel Ewherido, however, commended the Federal Government for putting in place the Electoral Act which he said will put a stop to ballot box snatching, rigging and other vices which the enemy of the state has always used to put themselves into power. He called on party faithful to ensure that each unit and ward is won as the unit is the foundation of all elections.

Your case is dead on arrival, Delta State APC to PDP