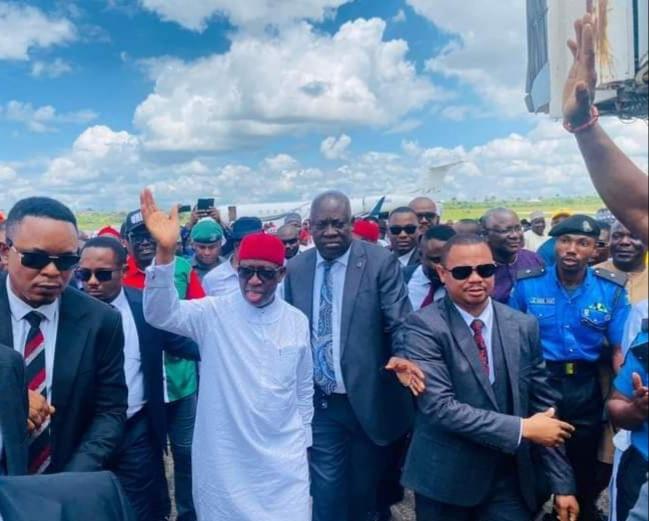 A socio-political organisation,  the Peoples Democratic Party (PDP) Victory Group (PVG), has thanked Deltans for coming out in their large numbers to receive the Vice Presidential Candidate of the PDP,  Senator Dr.  Ifeanyi Okowa in Asaba.

Secretary to the group, Comrade Fidelis Egugbo,  gave the commendation at the Cenotaph, Asaba, venue of the reception on Thursday.

According to him, the crowd witnessed at the event was clear evidence that PDP’s winning streak would remain in the oil and gas-rich state for a long time.

Egugbo, who is the Special Assistant, Media to Governor Ifeanyi Okowa said, “today, Deltans are speaking with one voice that they are happy that for the first time, their son who is also, their Governor, Senator Dr. Ifeanyi Okowa, has been chosen to be the Vice President of the country.

“For more than two decades, Governor Okowa has been steadily serving Nigerians using different political platforms and today, from the smiling faces, it is obvious that Deltans are happy with his administration and will not only ensure victory for the party as usual but will reach out to their friends and associates across the country to ensure victory for the Presidential Candidate of the party, Alhaji Atiku Abubakar. ”

Asked how he felt about the criticism trailing the choice of Governor Okowa as the Vice Presidential candidate and Rt. Hon. Sheriff Oborevwori as the governorship candidate of the party in Delta State,  Egugbo said, “to those of us in PDP Victory Group, we are aware that it is not only the PDP that is fielding candidates for elections, so, those who are complaining see great opposition in the PDP that is why they are trying to demarket PDP candidates instead of campaigning for their candidates.

“These are persons with good track records and their emergence has naturally, sent shivers down the spines of opposition political parties, but we are more interested in telling Nigerians, Deltans in particular why they should not be deceived by these few individuals who are not confident in their abilities to win in the forthcoming elections.

“We say congratulations to Governor Ifeanyi Okowa and once again, thank Deltans for remaining steadfast with the PDP since 1999.”