BSM decries attempts by some CSOs to…

We will not support Okowa in next…

Omo-Agege has the capacity to lead Delta… 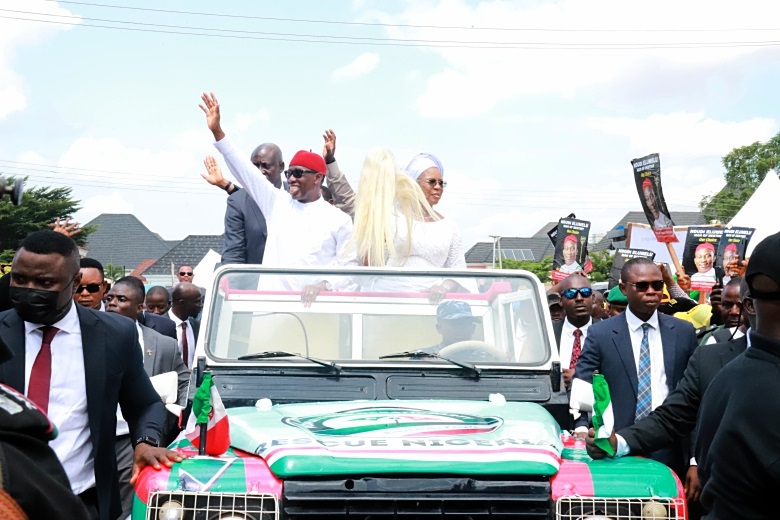 Delta Governor, Senator Dr. Ifeanyi Okowa (left) and his wife, Edith, in an open-roof vehicle, acknowledging cheers from teeming supporters and Peoples Democratic Party (PDP) faithful at the grand reception organised by the party in Delta to honour the Governor on his arrival in Asaba on Thursday after his emergence as the Vice-Presidential Candidate of the party in the 2023 General Elections. PIX: SAMUEL JIBUNOR

Delta State Governor and Vice-Presidential Candidate of the Peoples Democratic Party (PDP), Senator Ifeanyi Okowa, has said that the Atiku-Okowa ticket for the presidency of the country, would give Nigerians victory over insensitive and careless administration, and renewed hope for greatness.

According to Okowa, who stated this while addressing a mammoth crowd of supporters who thronged the Cenotaph, Asaba, to welcome him on Thursday after his emergence as the vice-presidential candidate of the PDP, the ticket of Atiku Abubakar and Ifeanyi Okowa is a ticket of grace, hope and victory and will rescue and rebuild Nigeria.

He thanked the people of Delta for their support, saying “what you have done for me is what is lifting me up today into greater heights.

“I thank God and Alhaji Atiku Abubakar who found me fit and worthy to be his running mate.

“I want to thank our National Chairman Dr Iyorchia Ayu and all the organs of the party for accepting my nomination as the vice-presidential candidate of the PDP.

“In the last seven years, all has not been well with our nation and when a challenge comes such as this as I tell people, what we need to do is to pray to be resilient and hopeful and the hope has come.

“Many may not immediately appreciate it but God has endorsed it and by His special grace, the process of rebuilding and recreation of hope for our Nigerian youths, students and for our women will start on the first day, that is, May 29, 2023.

“It is not going to be by our might; it is coming from the Lord God and God is going to use the youths, women, elders and opinion leaders of this country to cause this change to come.

“The change that is coming is a positive change and it will be very constructive and will bring meaningful life to our people.’’

Okowa urged youths to rise up to the challenge ahead and expressed concern for all young people “because what is going on nationally is not the Nigerian nation that we thought of.

He, however, stated that there was a chance to recreate and rebuild the country, and charged the youths to be committed to the course of rescuing Nigeria and must not be carried away by the “euphoria of the moment’’.

The vice-presidential candidate said that his administration had worked closely with youths in Delta to deliver on his SMART and Stronger Delta agenda for the people.

“I stand to represent the interest of the youths because the youths in Delta can truly affirm that in the last seven years, we have worked together to build peace, and create entrepreneurial programmes that have impacted the lives of our people.

He assured that the Atiku-Okowa ticket would not make promises they would not keep, adding that they were prepared to impact strongly on the lives of the Nigerian youths and women.

“The Atiku-Okowa administration will never allow lecturers to go on strike. Our universities will not go on strike nor will students’ unions go on strike.

“This is because we understand that education is very important for our youths and women, and will, therefore, not revisit the current pain that the APC government has visited on our families,” he said.

Okowa also assured that if elected, the PDP administration in the country would work with the organised private sector to ensure the development of industries that would provide jobs for the youths, adding that the private sector would have a new beginning of hope from May 29, 2023.

“Our administration is going to be a partnership between us and the youth groups, students and graduates so that we can work together to truly develop our country.

“Let us go all out there to ensure that we register and have our PVCs and by the special grace of God, we will send the APC government packing in February 2023.

“Our candidate has a well-documented programme to rebuild the nation, a nation in which we can trust ourselves again because Nigeria today is much divided and that is not the Nigeria of our dream.

“He will tackle, along with me, the issues of insecurity, and in tackling insecurity we realise that we have to provide jobs for our youths.

“We need to rebuild the economy of this nation and education and entrepreneurial programmes are key programmes for the Atiku-Okowa administration,” he said.

He recalled that his “Principal’’ in the presidential race,  Atiku Abubakar, had spoken consistently about the need to restructure Nigeria since 1986, and explained that restructuring the country will make it a better nation.

“Atiku means well for this nation and I know because I have discussed with him severally the challenges facing the nation, but we cannot do it alone.

“We need the support of the youths and women of this country to put food on the table of all Nigerians. Hope is coming because that ticket of grace, hope and victory is coming and it will turn Nigeria around for the good of each and every one of us and Nigeria will yet again be respected in the comity of nations,” Okowa stated.

The ceremony was attended by the wife of the governor, Dame Edith Okowa; the Deputy Governor, Mr Kingsley Otuaro; Minority Leader of the House of Representatives, Chief Ndudi Elumelu; Speaker of the State House of Assembly and governorship candidate of the party, Chief Sheriff Oborevwori; State Chairman of PDP, Chief Kingsley Esiso among others.