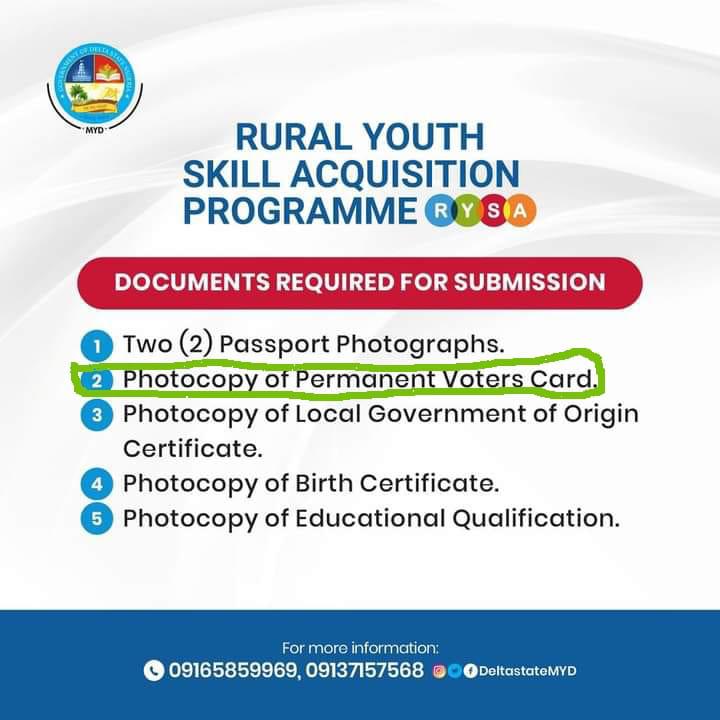 Ahead of the 2023 general elections, the Delta APC Gubernatorial Campaign Organisation has raised the alarm over plans by the State Government to compromise the 2023 elections in the state by illegally obtaining Permanent Voters Cards (PVC) from unsuspecting voters.

Specifically, it described the move by the Delta State Ministry of Youth Development to obtain Permanent Voters Cards from applicants for its skill acquisition programme as fraudulent.

In a statement by the Director, Communications and Media Strategy of the campaign organisation, Ima Niboro, the group called on the police and other relevant agencies to arrest the situation.

He said the aim of collecting PVCs from applicants is to disenfranchise them and use such details to manipulate the outcome of the 2023 general election in the state.

“Our attention has been drawn to a fraudulent move by the Delta State Ministry of Youth Development through its Rural Youth Skill Acquisition Programme to obtain Permanent Voters Cards (PVC) from applicants.

“There is no correlation between an applicant seeking skill acquisition and his PVC, as this only suggests that the PDP government is hellbent on rigging the forthcoming elections in the state.

“Justification that the move is meant to collect the details of applicants falls flat on its face as there are other documents like National Identity card, Drivers Licence, International Passport that could equally serve the same purpose.

“Not even the TraderMoni loan scheme, N-Power, MarketMoni, FarmerMoni and other social intervention programmes (SIPs) of the Federal Government was PVC used as a condition precedent for applicants to access the schemes”, he said.

The former presidential spokesperson, therefore, urged Deltans to be wary of giving their PVC details to any individual, corporate or government agency, warning that this was a sure way of being disenfranchised.

“It bears repeating that PVC is the only surest means of electing credible leaders at all levels and citizens should not trade them to racketeers under any guise,” he added.