Deputy President of the Senate, Senator Ovie Omo-Agege, Delta State Chairman of the All Progressives Congress (APC), Elder Omeni Sobotie and former Speaker, of the Delta State House of Assembly, Rt Hon. Monday Igbuya have urged Urhobo Nation to vote for Chief Ede Dafinone as the next senator to represent Delta Central at the red chamber, insisting that the chartered accountant is the most qualified. 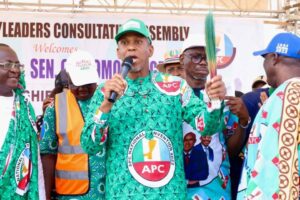 The three leaders while speaking separately on Tuesday at the continuation of the party’s ward-to-ward campaign to Iyara and Oviri Olomu in Ughelli South Local Government Areas of the state, said that not only Dafinone is the most qualified he is experience too adding that the urhobosneed him at this critical time.

Delta APC governorship candidate, Senator Ovie Omo-Agege while enjoining the people of Ughelli South to vote all APC candidates noted, that Chief Ede Dafinone is the most suitable to takeover from him, saying that Chief Amori should stay back at home to advise younger politicians.

“On the day of the presidential election, you all should come out emass and vote for Asiwaju Bola Tinubu, when you vote for Tinubu and all the APC candidates, including the Senatorial and House of Representative candidates, together with me as the governor, we shall meet all your needs.

“Not everyone you send to the Senate, he must be a well-educated person and someone with vast contacts and connections, if not he will not be able to attract anything to Urhoboland

“Senate is not a place you go to show your skill on Wrapper tying, you must have a name, so that when they call your name people will respect you, Chief Ede Dafinone has a name and contacts to give Urhobo Nation effective representation.

“So, to Urhobos, the only way to appreciate me for the service I rendered to the Urhobo Nation as a Senator, is to vote for Chief Ede Dafinone as the next senator.

“Ede Dafinone is very educated and qualified as myself, if not better qualified, he has contacts like me, and those he is unable to reach I will assist him to get there, so all that the Urhobo Nation desires from the Senate, Dafinone will bring them to us.

“Amori is my friend but he can’t represent us now, his time has passed, at over 70 years he should stay back at home to be giving the younger ones counsel, we don’t need a sleeping senator, hence we should all vote for Ede Dafinone.

“Okowa gave him a job as the Chairman of Asaba Capital City Development Agency, which is enough for him at his age, if we win, if he decides to retain that position, we will give it to him, and he should forget about going to the Senate, we want the best minds, the best material to represent the Urhobo Nation at the National Assembly, that is when Dafinone should represent us, Omo-Agege added.

Speaking also, the former Speaker of the Delta State House of Assembly urged Urhobo people and particularly Okpe to reward Chief Ede Dafinone with their vote in order for him to continue the lagcy of his father who served the Urhobo nation meritoriously.

According to him, “We are begging you in God’s name to vote Ede Dafinone for Senate. His father was a Senator before, and the record of his father will guide him to perform, and Omo-Agege’s record at the Senate, which he handed over to him will also spur him to beat his record.

“When his father, Chief David Dafinone was a Senator, he facilitated the establishment of Sapele Sea-Port, so the evidence is there. If we begin to talk about Dafinone and Omo-Agege today we won’t leave here.

“Don’t listen to those stories PDP is churning out. I am a founding member of the PDP; the party has run out of ideas,” he stressed.

On his part, APC State Chairman, Elder Omeni Sobotie charged the Urhobo nation to vote for a man they can trust and not someone who will sell Urhobo interest when offered money at the Senate.

He noted that Ede Dafinone has a pedigree that set him apart as a man that will not sell us at Abuja, “Urhobo will not send a betray as a Senator, we don’t want an old man would think that the Senate is a place to go and showcase Urhobo wrapper tying skill.

“Amori was elevated politically by Chief James Ibori, but today he has turned around to join Okowa to be fighting Ibori.
The type of person that Urhobo wants in the Senate is a man whose word is a bond, a man who will not trade off Urhobo’s interest for his stomach.

“The current PDP Senatorial candidate was someone we all knew. Those who know him will, know what he was. But God used an instrument, Chief James Onanefe Ibori to bring him from grass to grace.
“Today he’s in the company of Okowa stabbing Ibori. Is it right? Should he be allowed to go to the Senate? Even Peter in the Bible waited for the cock to crow twice before he denied Jesus Christ, but this one didn’t even wait for it. That same character wants to represent the Urhobo people. Urhobo man is noted for his prime. If at sixty you find yourself serving coffee in the aircraft, it means you wasted your youth.

“The position of Senator in Urhoboland must be held by somebody whose word is as good as a bond. Who personifies integrity and trustworthiness. That person is no other person than Chief Ede Dafinone.

So, that man is not going there. Because if he gets to the Senate and he is offered money, he will sell Urhobo Nation. And because we don’t want somebody that will sell us, we should not vote for him out.”

Earlier, Chief Ede Dafinone charged the people of Delta Central to vote all APC candidates, saying that Deltans should vote a government that will meet their needs that they didn’t even asked for.