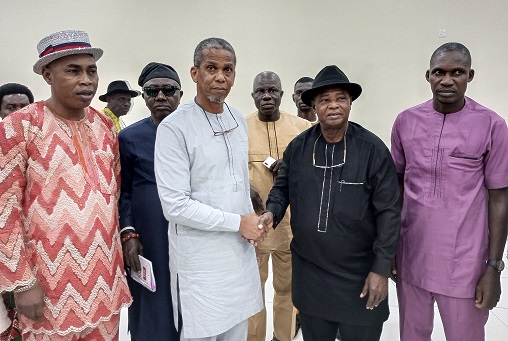 Ahead of the 2023 General Elections, the All Progressive Congress, APC Senatorial Candidate for Delta Central, Chief Ede Dafinone, has said that the party is better positioned to win elections in Delta State.

Dafinone who stated this on Friday when he and his team visited Delta Forces United, DFU, at Effurun, Uvwie Local Government Area of Delta State, assured party faithful and Deltans that their votes will not only count in the 2023 general elections, the votes will be protected.

While addressing, Chief Dafinone said, “Delta APC is at its best moment of greatness today, we are now more united and our chances of winning the 2023 elections against in the state is now greater, we have been strong in opposition but never at the level of today”, adding that APC will certainly take over in 2023.

He assured DFU of secured, protected, and counted votes, ” Our DSP Ovie Omo-Agege has shown that he can do the job when he becomes our Governor, he has done very well in the Senate and will do more as a governor.

“2023 elections present our best chances in taking over government in the State, that is why we must reach out to all our people, even those who have some misgiving, we shall bring everybody on board, because one vote matters in the next year’s elections”, he added.

The Coordinator of the group, Mr Collins Mukoro, while responding, assured the award-winning chartered accountant that Delta Force United, DFU, will deliver all the party’s candidates in the forthcoming elections, adding that Chief Ede Dafinone is no exception.

“This is a group under the leadership of Honourable Minister, Festus Keyamo SAN, and has been around for over 14 years, we are of like-minded people, not satisfied with the way this state is being governed by PDP, and are out to promote citizens’ participation in government and good governance in Delta State”

Mr Mukoro added that the membership of the group cut across the 25 local government areas of the State, and their PVCs will certainly deliver Deltans from the hands of a party that does not have Deltans at heart.

At the meeting of all APC candidates in Delta Central with party leaders and elders at the resident of Delta Central Campaign Coordinator of the party, Dr Christopher Obieuwevbi, Dafinone who also spoke
stressed the need for total and genuine reconciliation in the party, insisting everyone in the party is important.

Meanwhile, the Okpe Chief has reposed confidence in the ability of the APC Delta central constitutes reconciliation committee to resolve some hanging issues and bring every party member on board.

Dafinone who was addressing journalists shortly after the meeting said, “not only the committee will do well, with this move, APC will win the governorship election and every other elective position come 2023, because, with a united Delta APC, victory is sure,” he then urged those who are aggrieved in the party to embrace peace.