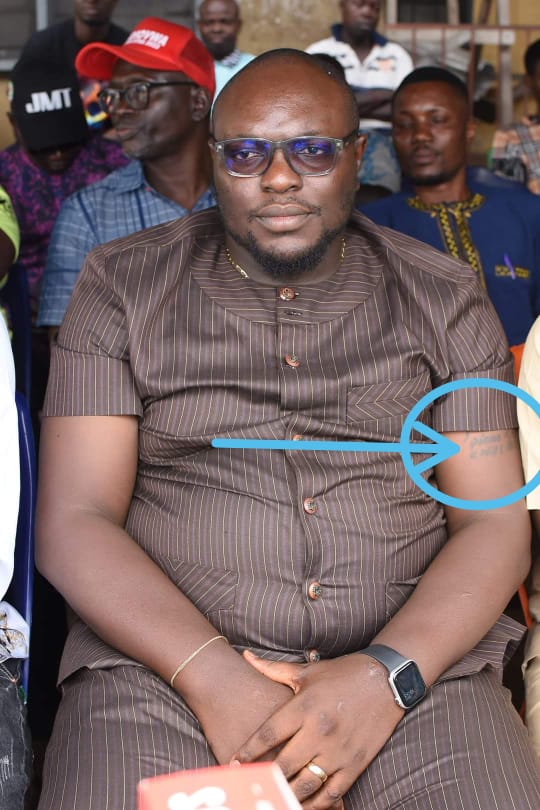 Like previous slandering narratives, we have once again read one of Jimmy Idiovwa’s vain efforts through SAHARA REPORTERS to smear Barrister Omonade’s good image in the alter of politics of childish emotions and defamation. One wonders how a mentally poor character like Jimmy Michael Idiovwa should propose to be a legislator. Does he know the intellectual engagements that are required in the business of legislation? Does he think that to legislate is to be brazenly rascally or thuggish? Someone very close to Idiovwa, that man of little mind, should let him know that legislative business is not meant for people with mental poverty, who manifest callow emotions of slander. More worrisome, is how Idiovwa, despite his display of obvious mental hollowness, is patronised by some people, who ridiculously perceive hypocrisy as a political norm. Ordinarily, we should ignore and dismiss Jimmy Idiovwa’s display of political juvenility and character assassination. On another note, we have decided not to give any chance for the fertilizations of injurious falsehood, for the sake of posterity.

Our candidate, Barrister Matthew Onojighofia Omonade, the APC Candidate for DTHA in Ughelli North Constituency I, is a young man of deep intellectuality, empathy and integrity that upholds the tenets of law and justice at all times. For instance, prior to the declaration of his interest to seek an elective position into the Delta State House of Assembly, Barrister Omonade officially resigned his appointment as Senior Special Assistant on Legal and Constitutional Matters to the Deputy President of the Senate of the Federal Republic of Nigeria, Senator Ovie Omo-Agege. It is on record that Omonade tendered his resignation on March 30, 2022 about two months before the May 25, 2022 House of Assembly primary election, which was duly acknowledged by the National Assembly on the same day (March 30, 2022). Same was widely circulated in the media and other social platforms. It is instructive to note that from Section 84 of the Electoral Act, 2022 ( as amended), no time frame for resignation was stated; as such, letter of resignation could have been tendered one day to the primary. Omonade, however, resigned about two months to the primary elections and did not keep mum on it, as same was widely circulated. This clearly shows his honesty and willingness to always do the right thing.

Is it not shameful that Jimmy Idiovwa and a minority of thoughtless characters in his team have decided to market hate against Barrister Omonade? How did they conceive the thought that Barrister Omonade who duly resigned his appointment as required by law committed any crime? It is shameful that Sahara Reporters had to publish such callow narrative. This further underscores the poor reputation of Sahara Reporters as an online media platform, which is known to all Nigerians. Did the National Assembly at any point write Idiovwa or anyone that Barrister Omonade did not resign?

The low heads who came up with the childish narratives that Barrister Omonade received salary for some months after resigning his appointment, are not patient enough to know that the salary for March, the very month he resigned, was paid in April, which was his entitlement. When Barrister Omonade observed that salary of two more months were paid to him, he promptly went to the National Assembly to notify them and took the requisite steps to refund the two months salaries. It was his personal visit that put a stop to the payment. Hence, from then till date, no further payments were made to his account. 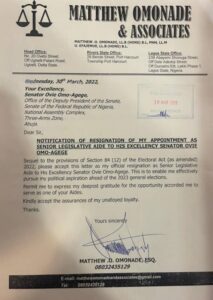 We are aware that apart from the fact that Jimmy Idiovwa instigated the writing to INEC as they have alleged, they also wrote a petition to the EFCC over section 84, and Idiovwa was complaining recently in Abuja when he went for the Supreme Court judgment of Edevwie V. Oborovwori, that his petition against Barrister Omonade has not been approved. This evidently points to the fact that Idiovwa has nothing to offer to his people– he merely desperately seeks power for personal aggrandizement. He knows very well that he has lost the election, and like a drowning man, he is throwing his feeble arms to drag anything along. It is brazen!

Assuming Omonade committed any infractions as a result of the two months’ salaries paid into his account even after he has resigned, the fact that Jimmy Idiovwa had to instigate the writing of petitions and publication on SAHARA REPORTERS, speaks volume of his emptiness, crass ignorance and mental hollowness.

The political activities, actions and utterances of Idiovwa underscore the lowness of his mental quality. He is too infantile with negative emotions and intellectually sterile to contemplate the big business of legislation. As we stated earlier, legislative activities are not meant for some thoughtless, low heads. We have decided to give him this privilege of response so that, at least, he would feel some level of recognition from us. He will definitely celebrate this response because we have long been dismissive of his childish conducts, which are traits not befitting of someone that should be proposing to make redemptive laws for his people.

We have decided not to stoop too low to join issues with a man whose only work experience is OML 30 Pipeline Surveillance Contract. We will not bother bringing up his atrocities and that of his brother against the hapless people of Ughelli-North Constituency 1. They are in the full glare of the public.

We are, however, prepared to engage him intellectually, specifically on the contents of our manifestos. Our focus is to impact our people and constituency positively; so, we will not lose focus by engaging in politics of juvenile emotions and slander.

At least, Idiovwa has not accused Barrister Omonade of stealing. We will, however, not be surprised if he and his supporters manufacture worse narratives. They all attest to the lowness of their thoughts which further accentuate their mental and emotional immaturity. It is shamefully so.

Idiovwa and his fellow travelers of mischief should note that Omonade bought free JAMB forms for over 60 indigent students across Ogor, Agbarha-Otor, Evwreni, Orogun 1 and Orogun 2 recently. Several of whom have gotten admission into several tertiary institutions. In fact, we just got an update that one of the beneficiaries of the Free JAMB Form Intervention of Barrister Omonade, Precious Odokoji from Orogun, has just been given admission on merit to study Law at the Delta State University, Oleh Campus. These are the motivations for Omonade’s political journey.

On this note, we challenge Idiovwa to a debate. He should choose any venue, time and place of his choice, so we can talk real issues that affect Delta State and Ughelli North Constituency I. What we intend to do is to address insecurity, economy, creation of job opportunities for our teeming and unemployed youths. We intend to carry our oversight functions and other sundry issues that will ensure the policies of government are efficiently implemented for the good of all.

A man that privileges TATTOOS on his body over sound reasoning cannot legislate for us. He has to pitch his tent in the area of his strength– tattooing his body and engaging in thoughtlessness.

To help Jimmy learn a little, we recommend him to the case instituted by Hon. Felix Anirah (PDP) Vs. Perkins Umukoro (PDP House of Assembly Candidate, Sapele State Constituency), where it was contended that Perkins Umukoro who was PDP Sapele LGA Chairman and SSA to Okowa resigned few days to the primary and received payments after his primary. Idiovwa should go and ask what happened to the case. We would have preferred him going to Court, so we can teach him a lesson. Foolishness is not golden.

Idiovwa, you have to grow! Omonade no be your mate!

Ede Dafinone As A Movement For A Better Urhobo Nation