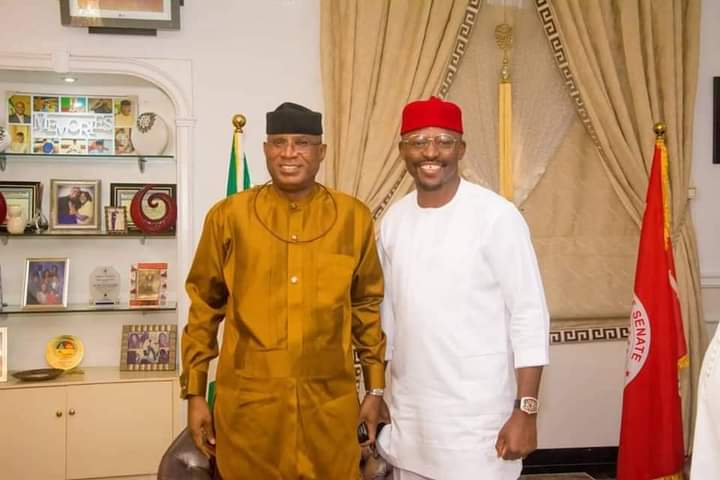 Ijaw leaders and kinsmen of elder statesman, Chief Edwin Clark, have thrown their weight behind the endorsement of Delta APC Governorship Candidate, Senator Ovie Omo-Agege, for the governorship of the state in 2023.

The leaders who described Chief Clark as the father of Ijaw Nation, spoke in Warri, Delta State at a meeting of The Struggle Platform, a group pushing for improved conditions for Ijaws in oil-bearing communities in the Niger Delta.

Leader of the group, Elder Timi Ogoriba, said Clark commands respect in the Ijaw Nation, stressing that when he speaks, his kinmen would follow.

“Our father has given you (Senator Omo-Agege) his blessings. He is the father of the entire Izon nation. It was well publicised. I watched it on television when he said, ‘I am of PDP. They didn’t do what was right. So I have left them. Now that you are here with me, I will vote for you’.

“And if those things have been stated by our elder like that, who are we? We will give him that support that he deserves and go ahead with that.

“Today, you are seeing some of us from Bayelsa, Rivers, Edo, adding our voices to those in Delta State. They are our brothers, kith and kin. Whatever affects them affects all of us. We will give them that support and ensure that when the day comes we will know where to cast our votes,” he said.

Elder Ogoriba called on the Deputy Senate President not to neglect the oil-bearing communities of Ijaw when elected as governor. He lamented that despite laying the golden egg, the Ijaws have been neglected by successive administrations in the state.

He, however, expressed optimism that when Omo-Agege becomes governor, he will replicate his record-breaking achievements as lawmaker in all parts of the state.

His words: ” I am meeting you formally for the first time but we have heard so much about you. I heard about you when my wife was going to school in Anwai, you were the SSG of Delta State.

“We have heard so much about you. Today, you are the Deputy President of the Senate. That is a very high office. It didn’t come very easy. It’s by dint of hardwork that you have ascended that office. And taking an office is one thing, but doing justice with that office is quite another. And we have seen that you have been using the office altruistically; that is to the welfare of so many persons, your constituents and Delta as a whole.

“This House met on July 4th and said there is one man that we have to meet. Because looking at his credentials, if we give him support, those of us that are from The Struggle Platform, together with Deltans, I think we will go places.

“We are happy and you can see that so many persons are here because they believe in the cause. If we do not believe in it, we will not be here.

“And nothing goes for nothing. We believe that something definitely will be given to our people so that by the end of the day, they will know that where we gave our support to, has brought credence to us so that we can get the dividends of democracy”.

Host, Chief Dan Ekpebide, threw his weight behind Chief Clark’s endorsement and promised to mobilise his supporters for all candidates of APC in the forthcoming election.

Chief Ekpebide extolled the leadership qualities of the DSP for influencing numerous projects to his constituency without executive powers.

It would recalled that Clark, the former Federal Commissioner for Information who also led the struggle for the creation of Delta State in 1991 had recently affirmed his confidence in Senator Omo-Agege’s capacity to turn the fortunes of the state and its people around.

He gave his endorsement after Omo-Agege led a powerful delegation to the elder statesman in his Abuja home.