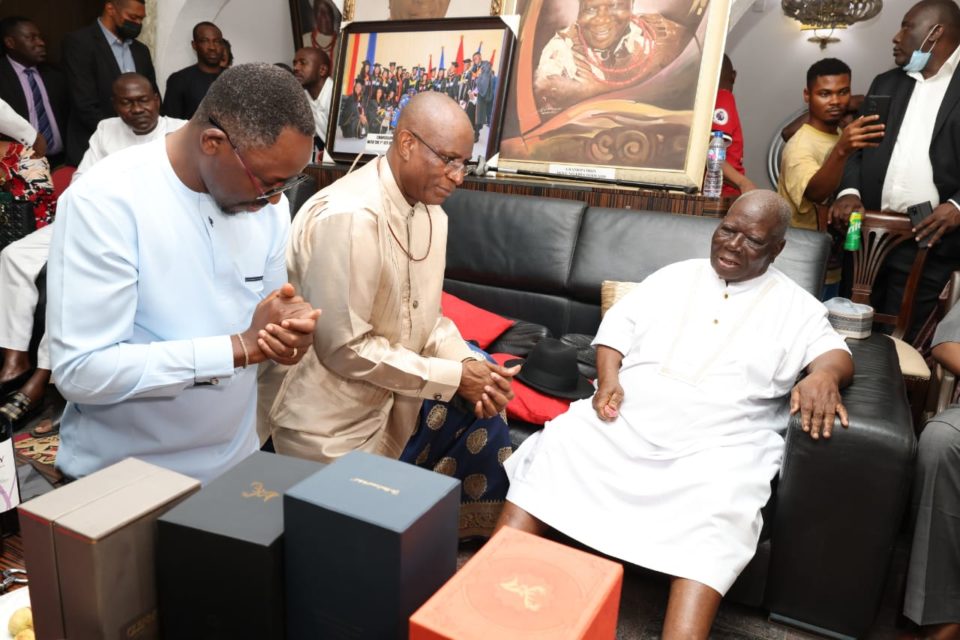 Elder statesman, Chief Edwin Clark, praying for delta APC governorship candidate, Sen. Ovie Omo-Agege and his running mate, rt. Hon. Friday Osanebi when the DSP led a delegation on a consultation visit to Clark in his Abuja home on Thursday.

…I made positive impacts in my senatorial district; I will change the fortunes of Delta – Omo-Agege

The gubernatorial ambition of Deputy Senate President, Senator Ovie Omo-Agege, today, Thursday received a boost as the Niger Delta leader and elder statesman, Chief Edwin Kiagbodo Clark (CON) has endorsed his asperation, promising to support and vote for him come 2023.

Chief Edwin Clark stated this on Thursday, at his Asokoro home in Abuja, during a consultation visit by Senator Omo-Agege at a ceremony attended by top personalities from Delta State.

The former Federal Commissioner for Information who also led the struggle for the creation of Delta State in 1991 emphatically restated his confidence in Senator Omo-Agege’s capacity to turn the fortunes of the state and its people around.

He says, “My son, you will be the governor (in 2023). Your father who is no longer with us will be proud and happy to see me, his brother working to make his son our governor. Authority belongs to God and I want to pray for you,” Chief Clark stated, adding that Senator Omo-Agege’s administration would massively transform the state within eight years.

Chief Clark disclosed that after seeing the massive pace of infrastructural and human capital development being executed by Senator Omo-Agege in his Delta Central Senatorial District, he had advised him to spread such historically significant goodies to other parts of the state and that Senator Omo-Agege did not hesitate in accelerating the development of areas outside his constituency.

Clark insisted that he would vote for Omo-Agege against the opposing Peoples Democratic Party (PDP) even though he was once a member of PDP.

In his address, Senator Omo-Agege stated that he, along with his running mate, Rt. Honourable Friday Osanebi and members of their gubernatorial campaign team were starting their first round of formal consultations with a visit to Chief Edwin Clark before they begin visits to various traditional rulers on Saturday.

Senator Omo-Agege said that his developmental impact through infrastructural projects, employment, humanitarian efforts and human capital development positively impacted every town and community in Delta Central and stressed that he is seeking an opportunity to raise Delta State to a level where its development can become easily comparable with that of Lagos, Rivers, Akwa-Ibom and other leading states.

Omo-Agege lamented the profound deterioration of Warri City and infrastructural facilities across the state over the years, adding that great opportunities exist to boost tourism, road transport, education, employment and the internally-generated revenue profile of the oil-producing state.

“It is said that ‘by their fruits, you shall know them’ but my achievements in Delta Central Senatorial District and beyond speak for themselves. Among others, we have done solar street lights, provision of transformers, e-libraries and numerous other projects and we have ensured the allocation of N600 million for the construction of students’ hostel accommodation in Ukwuani Local Government Area.

“Under the 2022 national budget alone, we have over 750 projects, in 2021, we had about 600 and in 2020, we had about 450 projects” stated Senator Omo-Agege while reeling out numerous developmental projects, including Federal Polytechnic, Nigerian Law School Campus and several other projects that he facilitated for Delta State within four years.

“The Warri that you grew up in, is dead and now in great need of massive urban renewal. God willing, it is one of the major assignments that our administration will focus on if we emerge as Governor and Deputy Governor of Delta State. Okerenkoko, Ode-Itsekiri and other places can be developed and beautified to accommodate five-star hotels and become huge revenue-yielding areas like Hawaii in the United States.

“We can become what Lagos became; why can’t we generate enough internally-generated revenue to power massive development,” he said.