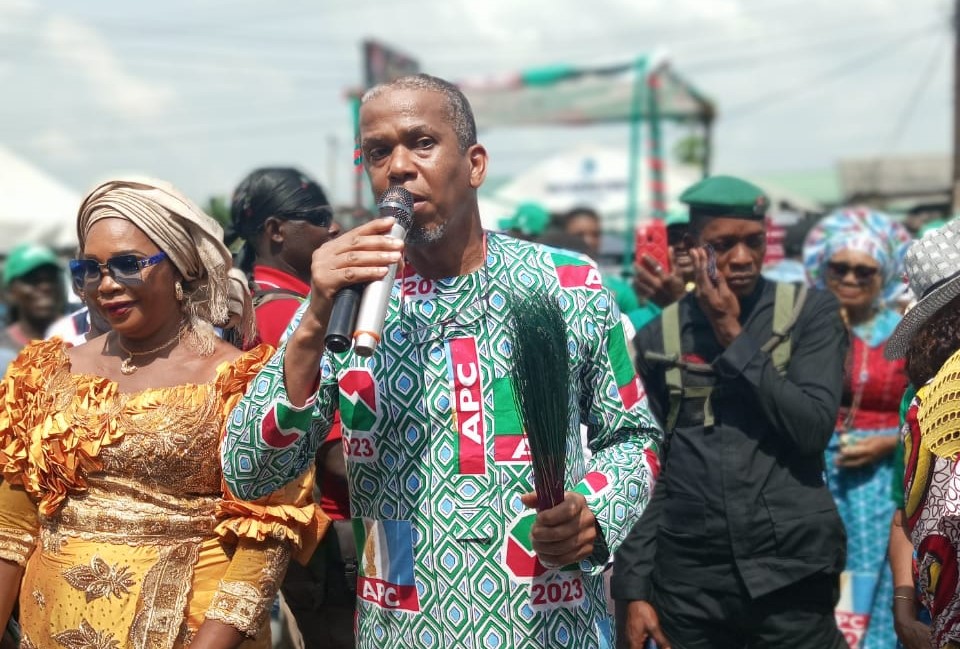 The Delta Central Senatorial Candidate of the All Progressive Congress, APC, Chief Ede Dafinone has urged the people of Sapele Local Government Area to vote all candidates of APC in next year’s election, adding that the party feels the pain of the people.

Dafinone who spoke at Ward 1, 2 and 3, during his Ward-to-Ward campaign in Sapele Local Government Area, on Monday, 5th of December, 2022, said when elected he will give the people better representation by ensuring that he brings federal government attention to the plight of Sapele people.

“When I get to the Senate, I will represent my people with a better portfolio. Since there won’t be rigging in this election, so, everyone should come out and vote. Our mission is to win the election with a landslide,” adding that the people of Sapele would benefit greatly from an APC-led Government both at the Federal and State levels.

Dafinone who is also chairman of the Nigeria Conservative Fund, NCF, while receiving a rousing welcome in the Wards visited, told the party supporters that though the Deputy Senate President and APC Governorship Candidate in Delta, has done much for the people of the state in terms of projects, Omo-Agege will do more as a Governor, insisting that a victory for all APC candidates is a vote for more development.

He then called on them to deliver their wards for all candidates of the All Progressive Congress, starting from the Presidential Candidate of the Party, Senator Ahmed Bola Tinubu to the House of Assembly candidate, Hon Moses Ogodo.

In Ward 2, Chief Tuesday Onoge, a chieftain of the party in the state while addressing the party faithful said Sapele Local Government was lucky to have a candidate of Dafinone’s profile.

“He is not only qualified, but he has also been successful in all his endeavours, he is not only connected; he is able and experienced” urging the people to vote for Dafinone and all APC candidates.

Hon Moses Ogodo, the House of Assembly, who also addressed the crowd at Ward 2, said the former NEXIM Bank board member was not only qualified but capable of representing the people of Delta Central effectively.

He said “We are here because of a man with quality, humility, Delta Central people you don’t have a reason not to vote for him,  a well-brought-up man, he has done it before and he will do it again, all you have to do is pick your PVC and vote all APC candidates, Delta and Sapele will become a better place for all of us” he added.

The Ward-to-Ward Dafinone Campaign team is expected to continue tomorrow with a visit to Wards 5, 6, 7, and 8.