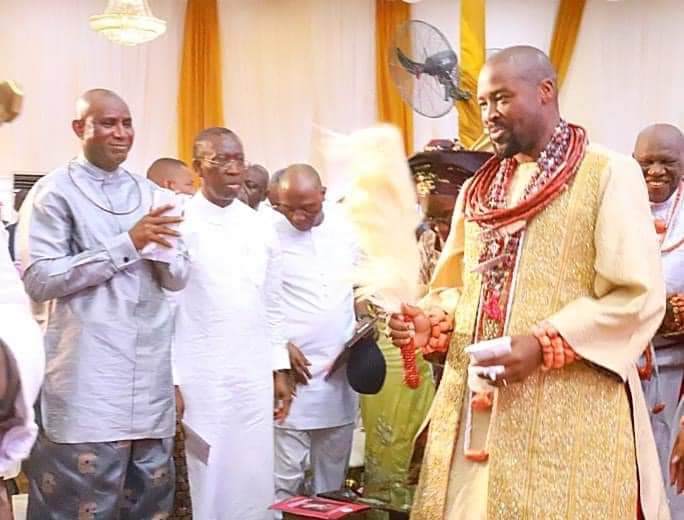 Delta State All Progressive Congress APC, governorship candidate and the Deputy Senate President, Senator Ovie Omo-Agege has described the Olu of Warri Kingdom, His Majesty, Ogiame Atuwatse III as an inspiration to many.

Senator Omo-Agege in a statement issued by the Director, Communications and Media Strategy, Delta APC Gubernatorial Campaign Organisation, Olorogun Ima Niboro,   lauded the royal father for his role in promoting national unity and enriching the cultural values of Nigeria.

He noted that as custodians of traditions, values and customs, traditional leaders have what it takes to galvanize all Nigerians towards peace, stability and progress in the country.

The Delta Central lawmaker, therefore, urged traditional rulers to use their influential status to promote good governance and strengthen the unity of the nation.

He said the revered monarch who has always dignified the cultural values of the Itsekiri people with great passion.

“I humbly join our good people to thank God Almighty for graciously keeping you in good health and sound mind to celebrate your First Coronation Anniversary as the youngest Olu of Warri Kingdom to lead the Itsekiri Ethnic Nation in over 500 years.

“Our people deeply cherish Your Majesty’s distinct place of honour as the symbol of the pristine cultural heritage and values of our Itsekiri people. Your special regard for the value of positive human relationships and clear vision of a modern, well-governed and organized society that is driven by the power of godly living, innovation and constructive, mutually respectful and excellent engagements across boundaries endear you to the people in unique ways”, he said.

Omo-Agege was accompanied to the Olu’s first-anniversary thanksgiving service on Sunday by his running mate, Rt. Hon. Friday Ossai Osanebi; Delta APC Chairman, Elder Omeni Sobotie and other chieftains of the party.

In his sermon, former President, of the Christian Association of Nigeria (CAN), Pastor Ayo Oritsejafor, harped on the need for all to thank God at all times.

Giving his sermon from the books of Psalms 100:4, Philippians 4:6, 2nd Corinthians 4:15, and 2nd Thessalonians 3:7-12, the Guest Speaker urged Nigerians to appreciate God no matter the difficult situation they faced.

The cleric urged youths in the country to imbibe the culture of hard work and dedication to service, even as he called on governments at all levels to empower youths to secure the future of the country.

He said: “Without thanksgiving, you have no access to God. Thanksgiving opens the gate. It brings you into the presence of God. If you are not grateful, you may become a ‘great fool’.”

Dafinone consults IPF, Udu PG, others; solicits their support ahead of 2023 elections