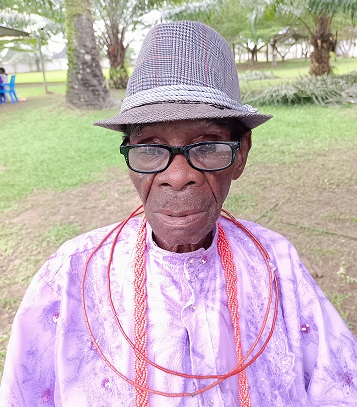 Recall that following the controversies surrounding the selection and alleged coronation HRM Sunday Okpurhe Uduaka 1 as the second king of the kingdom after the demise of the late king, HRM Samson Okirhioboh Imoyi Omene (Udurhie 1) last year has thrown the once peaceful kingdom into intricate crisis.

In a beat to arrest the drifting crisis, the Ethiope West Local Government Traditional Ruler Committee headed by the Ovie of Oghara Kingdom, Ovie of Idjerhe Kingdom, the local government council chairman and his Vice, representative of DSS and five delegates from Uduaka and Udurhie ruling house had a meeting on Friday, August 19, 2022, at Oghara.

Advocate.ng gathered that the committee after hearing from speakers from the two feuding factions, it was established that there was no Ovie-in-Council in Mosogar before the demise of the late monarch as he never inaugurated anyone and the one later constituted by Chief Amori cannot be called Ovie-In-Council because he is not the king.

“It was also agreed at the meeting that nobody has the authority to remove the Ugo of Mosogar, that the Oguedion Council of Chiefs headed by the Ugo is a separate structure and is the administrative arm of the Mosogar Kingdom while the Ovie-In- Council is the symbolic head of the kingdom and that both walks side by side.

“The Committee, therefore, resolved that for the interest of peace, all suspended chiefs by the two factions should resume sitting at the Oguedion Council of Chiefs with Ugo presiding as their suspension was illegal.

“It was further resolved that the Ugo should call and hold the meeting of Oguedion Council of Chiefs and where other issues affecting the selection of the new Ovie and new Otota would be resolved peacefully.

It was further gathered that the representative of the two feuding factions agreed to the terms of settlement at the Traditional Rulers Committee meeting, where the Uduaka Ovie -elect was present and had no objections with Chief Joe Omene of Udurhie and Chief Able Ogbakpah of Uduaka endorsing the decisions of the Committee.”

However, Chief Ighoyota Amori who was aware of the meeting but refused to the part of it, allegedly called another meeting with the Uduaka Ovie-elect and directed his stooge, Chief Sunny Okpurhe to suspend the Mosogar Kingdom’s Oguedion Council of Chiefs and Elders from sitting indefinitely, spackling a fresh crisis in the Kingdom.

Speaking to newsmen on the fresh crisis, the Ugo of Mosogar Kingdom said that the Oguedion Council of Chiefs and Elders is the body set up traditionally to administer the kingdom, According to him, “we have the chiefs, elders, Inotu, Eghweya and Ighele, so how can an individual who is not even a King wake up one day to pronounce that he has suspended our sitting indefinitely, where does he derive such powers?

“Even a King with a staff of office has no such powers because our constitution said that both bodies will run side by side and that none is superior to the other.

“All I am asking is peace in Mosogar, by the grace of God, I became 99 years old in May this year, I was recently pushed down from my Chair at Uguidoun on the order of Chief Amori and I was hospitalized for a week at Mascap Hospital at Sapele, and I was lucky to come out of it alive.

“The Local Government council and the Ethiope West Traditional Rulers Committee has asked to we go back to the Oguedion to meet and now the inciting statement from the Uduaka Ovie-elect, if anything happens to me or other chiefs at our sitting on Monday, Chief Amori and Chief Okpurhe should be held responsible.

“As the Ugo I don’t want to place a curse on any Mosogar son or daughter with the Idon staff, I know the implications, so I am wearing all those fomenting troubles in Mosogar Kingdom to desist or they will face the wrath of the gods.

“If you want to be king, be king to all Mosogar people, not a king appointed by an individual for the Uduaka and those aspiring to represent the entire Urhobo nation politically and yet cannot unit their home, should first unit their home, if you can’t ensure that there is peace in your home, how can you aspire to represent entire Urhobo nation, they say charity begins a home.

I Ugo the head of Oguedion Council of Chiefs and Elders by this publication is directing all chiefs to come for a meeting at the Oguedion by Monday as directed by Ethiope West Local Government  Traditional and Chieftaincy Committee and we are carrying out their directive and if anyone is attacked, injured or killed, Amori and Okpurhe will be held responsible.

He, therefore, advised the people of Mosogar to go about their business, be peaceful and law-abiding