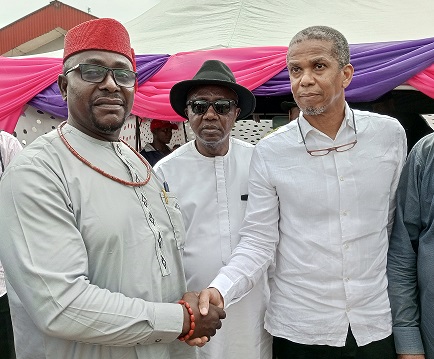 Delta Central Senatorial Candidate of the All Progressive Congress, APC, and prominent Urhobo son Olorogun Ede Dafinone, on Thursday, said the Deputy President of the Senate, and APC Gubernatorial candidate in next year’s election Senator Ovie Omo-Agege has the capacity to lead the party to victory, come 2023.

He added that the Obarisis of Urhobo land have not been lazy Senator, insisting that in the past 7 years, Omo-Agege has demonstrated that he can deliver when elected as governor of Delta State.

Dafinone who stated this during his consultation visit to the elders and leaders of the APC in Okpe local government area, at Odjedi in Delta State told prominent sons and daughters of Okpe Kingdom who had assembled at Okpoko residence to receive him that he will work for the Okpes and the Urhobos.

“Urhobos in the PDP have not been empowered in the past 11 years, so it’s time to seek alternative and those of us in the opposition also needs to be in government because we are tired of looking from outside when we have better programmes and policies to better our State”.

“DSP Omo Agege has done well by providing basic amenities, and infrastructure development in Delta Central, so it’s time for APC to take over in Delta State” reiterating the need to vote for Omo-Agege in next year’s election.

Dafinone also noted that the party is sending qualified people with experience to represent the party come 2023.

In his remark, Chief Julius Okpoko, the Okpe Elders and Leaders Council, acting Chairman said they were prepared to work with Chief Dafinone and other candidates of the party, adding that the Okpes will deliver Sapele and Okpe local government in the forth-coming election.

In Orhuoka, Chief Dr David Emuvie Emaniru assured the chartered accountant that the entire people of Orhuoka will vote for him

“Senator Ovie Omo-Agege is not the first Urhobo man who has gone to the Senate, yet he has touched the lives of everyone in Urhobo land. You have not gone to the Senate but I have heard a lot about you and I know when you get there, you will do more,” he said.

At Ekrejeta, Okakuro Dr Tedwin Emudainowho while speaking said Ethiope East was fully prepared to work for Dafinone in the forth-coming election.

At Erho Abraka, Chief Ayeni was straightforward ‘we don’t know how to deceive people. Our votes in Ward 2 are for APC. We have accepted you and we will not fail you. We have our PVC to play the game”.

NDDC: Groups warn against further delay in inauguration of governing board