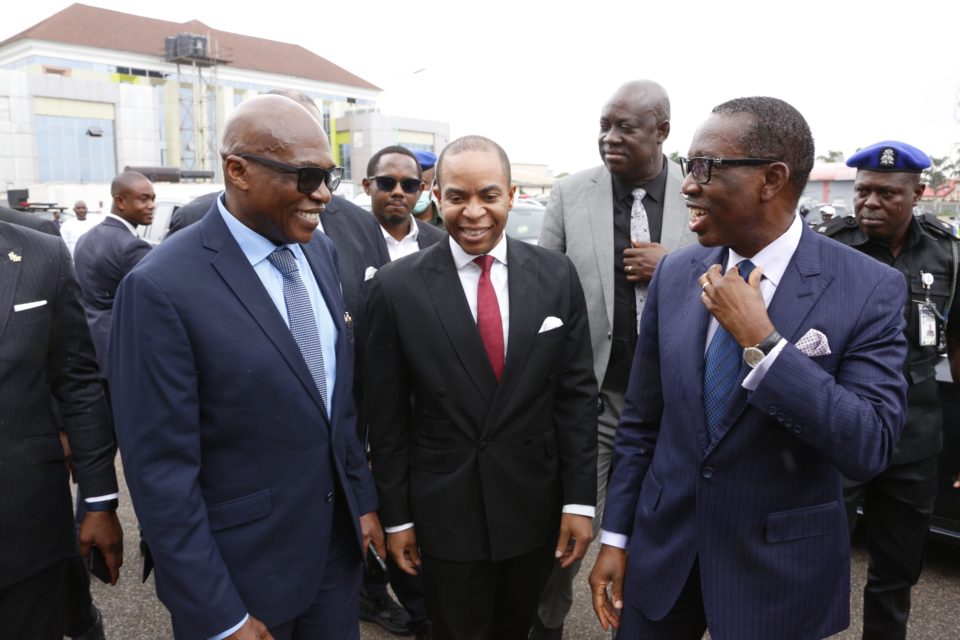 From right; Delta Governor, Senator Dr. Ifeanyi Okowa being received on arrival to the opening ceremony of the 2022 NBA Section on Legal Practice (SLP) Annual conference in Asaba on Monday by his Attorney General and Commissioner for Justice, Mr. Isaiah Bozimor,( middle), and Chief Ferdinand Oby (Chairman of the section). PIX: ENARUSAI BRIPIN AND SAMUEL JIBUNOR

Delta State Governor and the Peoples Democratic Party (PDP), Vice-Presidential Candidate, Senator Ifeanyi Okowa, has said that there cannot be an effective rule of law in Nigeria without financial autonomy and independence of the judiciary.

Okowa stated this on Monday in his keynote address at the Nigeria Bar Association (NBA) – Section on Legal Practice (SLP) 2022 Annual Conference in Asaba.

He said at the conference with “Legal Practice in Nigeria: Our Reality, Our Future” the theme, that the NBA leadership deserved commendations for its continued fight for the rule of law and for holding the executive arm of government accountable to the principles of fairness, equity and justice.

He commended the NBA for holding the conference in Asaba, one of Nigeria’s fastest-growing cities, and assured that his administration would continue to support financial autonomy for the judiciary in the state just as the legislative arm.

“The courts and the legal profession must continue to adapt to cope with rapid changes like cross-jurisdictional legal issues and resolve disputes over business activities in the virtual world. They will have to address the impact of information technology on their work.

“Of equal importance is the need for the Nigerian Bar Association (NBA) to continue championing the welfare and well-being of legal practitioners and members of the Judiciary.

“The Delta State Government is working to provide a framework under which the Judiciary and the legal profession can respond positively to these challenges, hence in 2021, I signed into law the Delta State Judiciary Fund Management (Financial Autonomy).

“While I agree that much work remains to attain genuine financial autonomy, the law marks a critical first step for the independent control of the Judiciary’s internal fiscal management and appropriations.

“My administration has and will continue to support the notion that judicial finance should be exercised free of interference by the executive branch of government in the same manner that the executive and legislative branches administer the funds appropriated for their internal operations.

“This is because there can be no rule of law without a guarantee of independence for the judiciary.

“Protecting the independence of judges and courts in the interest of the administration of justice includes giving them the substantial resources they need to fully perform their judicial duties properly and efficiently and to consider cases fairly and within a reasonable time as required by Section 36 of the 1999 Constitution of the Federal Republic of Nigeria (as amended).

“In addition, the courts must have the assurance from the other two state powers that they will have sufficient operating resources and financial autonomy in managing these resources.  We will continue to work to achieve this end ultimately.

“The legal community must put itself in a position to leverage the continental trade liberalisation under the AfCFTA because the expected growth in business and investments presents significant prospects,” the governor said.

He added that businesses would need competent lawyers to advise on domestic and international transactions, conflicts of laws and commercial dispute resolution and urged Nigerian lawyers to specialise in established and emerging practice areas.

“But there is an increasing need for legal advice in niche areas. These include international trade law, with the advent of the AfCFTA and the exponential increase in cross-border trade,’’ he said, adding that a society governed by the rule of law, must ensure that citizens had access to justice at reasonable cost and speed.

“Justice that is not affordable or delayed will amount to a denial of justice.”

He noted that the State shared NBA’s ideals of upholding the rule of law, and disclosed that his administration recently submitted the Delta State Administrative Procedure Bill to the House of Assembly for legislative action.

“The Bill strengthens the rule of law and improves the administration of justice by prescribing a fair and transparent procedure for Delta State administrative agencies to propose and issue their regulations.”

Acting Chief Justice of Nigeria, Justice Olukayode Ariwoola, represented by Justice Abdul Aboki, in his remarks,said that the NBA had a burden to ensure that legal practitioners kept to the ethics of the profession.

He said that the challenges of the legal profession were self-inflicted and lauded the choice of the conference theme which according to him was meant to address the challenges facing the profession.

Ariwola urged legal practitioners to brace up to improve the administration of justice in the country.

On her part, Chief Judge of Delta, Justice Theresa Diai, expressed delight with the partnership between the state government, the state judiciary and the NBA, saying that it was necessary for the development of the justice sector in the country.

She commended the Section on Legal Practice for championing the course of improving knowledge of legal practice in the country.

Earlier, President of NBA, Mr Olumide Akpata, had thanked the government and people of Delta for hosting and sponsoring the conference.

He also congratulated Governor Okowa for clinching the Vice-Presidential ticket of the Peoples Democratic Party PDP and wished him great success.

He said that the three sections of the NBA – Section on Business Law, Section on Legal Practice and the Section on Public Interest and Development Law had continued to grow in leaps and bounds.

“I commend the organisers for the choice of the conference theme and timing because of the critical role it will play in the administration of criminal justice in Nigeria,” Akpata stated.

He charged the judiciary to entrench the principles of accountability, probity and transparency in the management and allocation of the resources allocated to it.

Welcoming guests earlier, Chairman of the NBA-SLP, Chief Ferdinard Orbih SAN, said the objective of the conference was to valiantly confront the contemporary challenges facing the legal profession and design a road map for the future.

He said lack of consistency in judicial pronouncements was becoming an albatross for the legal profession, especially as regards electoral jurisprudence and called on members to find lasting solutions to the challenge.

Omo-Agege, Dafinone’s bond unshaken, no amount of blackmail can change it -Group