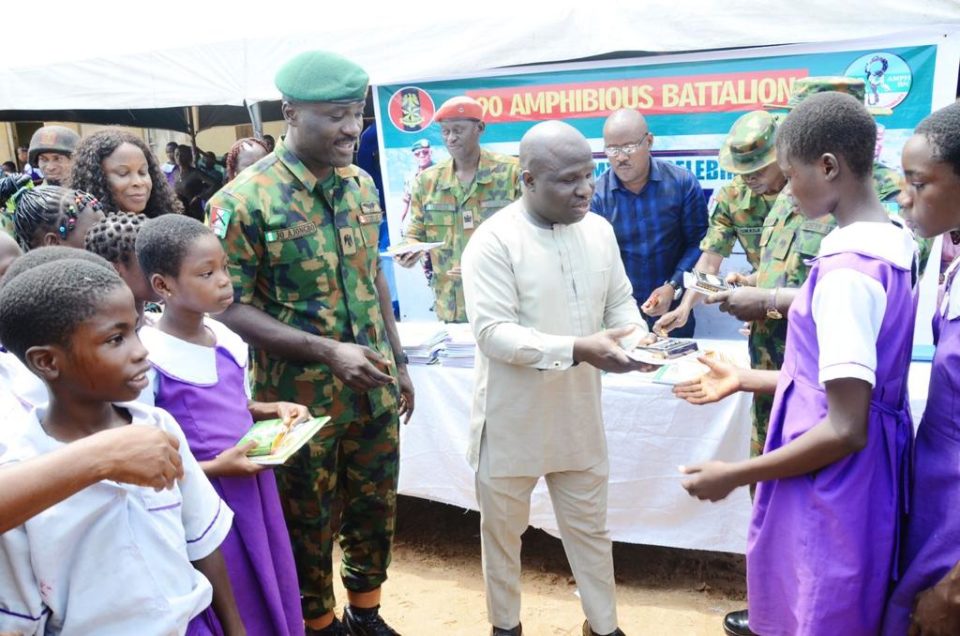 The educational outreach, according to the Commanding Officer of 90 Amphibious Battalion, Major J.O Ajongbo while addressing the pupils is in line with the vision of the Chief of Army Staff and Guidance of 63 Brigade Commander in Asaba to improve civil-military relations and to encourage education as a veritable tool for a successful future and a secured society.

He said: “We decided to culminate the week-long Nigerian Army Day Celebration for the year 2022 with the distribution of educational materials and instructional aids owing to the importance of education in nation-building. We are distributing these materials to encourage primary school pupils to focus on their studies and not engage in social vices. The exercise will also inspire the pupils to be good citizens of Nigeria and worthy representatives of their various communities.”

The children in their joyous mood appreciated the gesture and thanked the Nigerian Army for its efforts to defend and promote Nigeria’s unity.

The Chairman Ethiope West LGA, Hon Nelson Oghenedoro Owosu in his remarks, expressed gratitude to the Army for the kind gesture. Hon Owosu thanked the Nigerian Army for supporting the schools with the outreach and promised to ensure that the materials are put to good use by the schools.

In the same vein, the Vice Chairman of Warri North LGA, Hon Solomon Milkie who also witnessed the event at Ojomba Primary School, thanked Maj J.O Ajongbo while stating that he is an Alumni of the school and the gesture was unprecedented. He encouraged the pupils to take their education seriously in other to achieve greatness in life.

Relatedly, the Chairman of Orerokpe Community in Okpe LGA, Comrade Francis Ijejona said that the outreach was an epoch-making event that will be forever remembered by the pupils. Comrade Ijejona said that he was happy that, the Army is giving back to the society, as always and prayed the Almighty God protects all Nigerian Army soldiers and grants them all-round victory.

The Commanding Officer, Major Ajongbo also presented gifts and souvenirs to the teachers in appreciation of their service and to encourage them for their role in training future leaders and contributions to national development.

‘Defection of PDP supporters to APC, proof of Omo-Agege’s attractive style of politics’

DELTA 2023: Scripted Subterfuge And The Covert Anti-PDP Agenda Of An Unscrupulous Clique