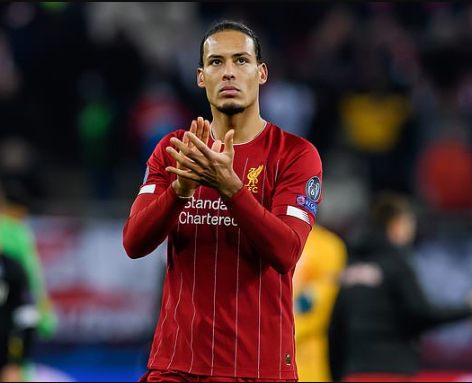 Liverpool defender, Virgil van Dijk has been named the Football Supporters' Association player of the year. The Dutch footballer beat his Liverpool team-mate Sadio Mane, Tottenham's Son Heung-min, Leicester striker Jamie Vardy and Arsenal's Pierre-Emerick Aubameyang to win the award.  'I'm very grateful to get this trophy. It means a lot to me,' the Holland international said. 'Thank you to everyone for voting me player of the year, all of the fans around the country.'Hopefully, I can keep doing what I'm doing; getting better and helping the team and the club.'  More than 340,000 votes were cast by fans, with Van Dijk beating Manchester City's Raheem Sterling into second place. Van Dijk is now the fourth Liverpool player to win the award in the last seven years, following Mo Salah, Philippe Coutinho and Luis Suarez. The post Virgil Van Dijk beats Sterling, Aubameyang, Mane & othersto win Football Supporters’ Association player of the year award appeared first on Linda Ikeji Blog.
Source: http://www.lindaikejisblog.com/2019/12/virgil-van-dijk-beats-sterling-aubameyang-mane-others-to-win-football-supporters-association-player-of-the-year-award.html