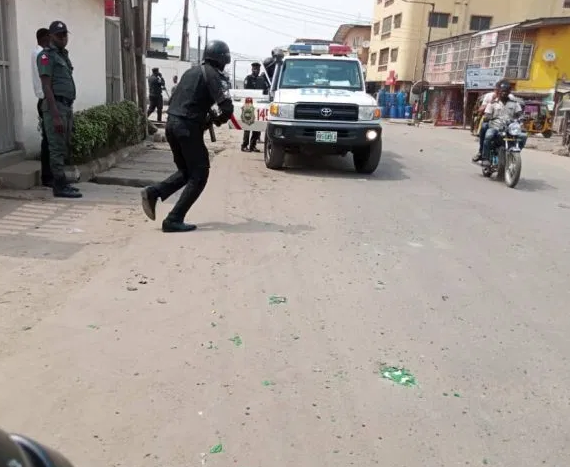 A brutal clash erupted on Monday in Aguda area of Surulere, Lagos, Southwest Nigeria, with two people feared dead and 75 people arrested by the police. The clash was said to be among rival gang groups.   The violent clash between rival gangs in Itire and Aguda which lasted for several hours forced many residents to stay indoors while businesses closed abruptly. The streets in Aguda were deserted as only visible things in sight were broken bottles and damaged vehicles.   The fight seems to be a reprisal attack from the clash which resurfaced last night. Residents of Enitan, Adetola and Willy Omiyi are now calling on security agencies to beef up security in the area over fear of another reprisal attack.   However, Police Public Relations Officer, PPRO, Bala Elkana confirmed that two people were killed in the clash which began on Sunday. According Elkana, on 15th December, at about 11:41am, Police received a distress call that someone was shot at Pako, Aguda Canal. On getting to the scene, Police found the corpse of one Alagodo ‘m’ 27 years old, a follower of one Eluku who is currently in prison over violent crimes. “On the 16th December, at about 08:30am, some hoodlums from Ijesha, in what looks like a revenge mission stormed Aguda in large numbers with cutlasses, bottles and stone and other dangerous weapons. The hoodlums destroyed about 22 shops and vandalised some vehicles.“Some hoodlums from Aguda equally reacted. One of the hoodlums from Aguda known as Timileyin Odulana was injured by the hoodlums from Ijesha. He was rushed to Military Hospital, Yaba, were he was confirmed dead,” he said. Elkana said police teams from the Special Strike Force on Social Miscreants, Rapid Response Squad, Area C Command Surulere, Aguda and Ijesha Divisions were mobilised to the scene.   He added that the situation had been brought under control, saying that “75 suspects from both sides were arrested. Investigation is ongoing and the suspects will be charged to Court. Meanwhile the Command has intensified patrols and surveillance within the affected areas.”The post Update: Bloody cult clash in Lagos leaves two people dead, 75 arrested appeared first on Linda Ikeji Blog.
Source: http://www.lindaikejisblog.com/2019/12/update-bloody-cult-clash-in-lagos-leaves-two-people-dead-75-arrested-2.html