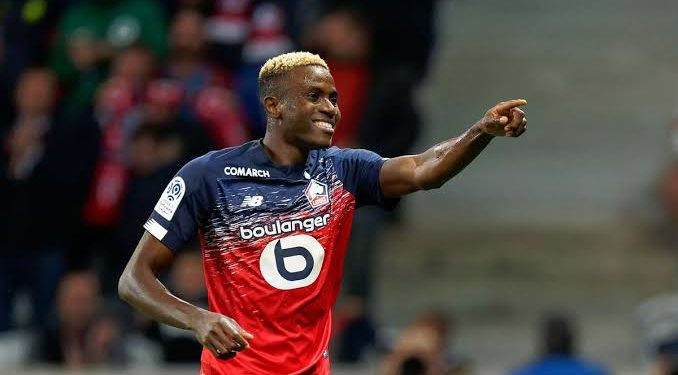 Super Eagles of Nigeria and Lille of France footballer, Victor Osimhen, was rushed to hospital on Tuesday night during his club's Ligue 1 match against Monaco.Osimhen, who scored against Monaco was substituted in the first half and fans initially thought he had sustained an injury, but reports coming out of France indicate the Lagos born player complained of severe chest pains and dizziness and had to be immediately substituted.According to a report by top French website, Sports.fr, who had direct knowledge of the scenario, the forward was rushed in an ambulance out of the stadium after complaining of severe chest pain.' Victor Osimhen was quickly forced to leave his place',Just after scoring (19th), the Nigerian international seemed to feel dizzy, followed by chest pain.' the French Website wrote.'He was quickly taken care of by the emergency services present at the Louis-II stadium, and taken by ambulance to a hospital center to undergo medical examinations.'Osimhen is Nigeria's most in-form striker in Europe at the moment and is wanted by Arsenal and Barcelona. The post Super Eagles striker Victor Osimhen rushed to hospital in ambulance after scoring a goal against Monaco last night appeared first on Linda Ikeji Blog.
Source: http://www.lindaikejisblog.com/2019/12/super-eagles-striker-victor-osimhen-rushed-to-hospital-in-ambulance-after-scoring-a-goal-against-monaco-last-night.html