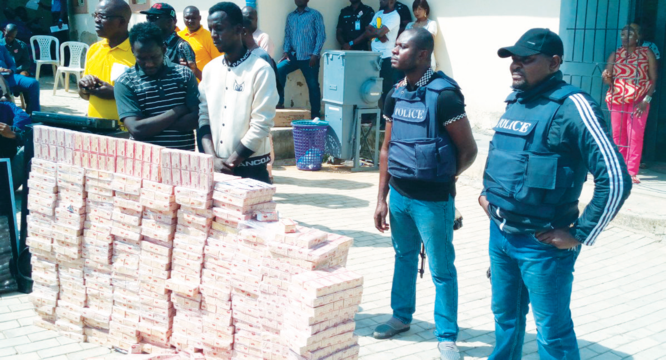 4,000 packs of tramadol worth N54 million has been intercepted by the Bauchi State Police Command.  The drugs which was being transported to Potiskum in Yobe State by some arrested suspects, was intercepted during a mop-up operations by the police.  Nigerian Police Public Relations Officer (FPRO), DCP Frank Mba confirmed this at the Force Headquarters where 71 suspects were paraded before newsmen. He said the suspects were arrested to ensure a crime-free Christmas and New Year celebrations. It was further gathered that a one chance syndicate, two-man gang of burglars, as well as suspected Automated Teller Machine (ATM) cards’ thieves were arrested in Abuja, the Federal Capital Territory (FCT). Mba said; “In order to ensure that citizens are able to travel on highways freely, and to have a violence-free yuletide, our operatives have been working round the clock.“Today, we have 71 suspects being paraded. Nine AK 47 rifles, three other assorted weapons, vehicles, over 18 handsets of assorted make, were recovered.“Over 4,000 packs of tramadol tablets and other incriminating items were also recovered during mop-up operations. Somebody gave us an estimate of N54 million, but I don’t deal on drugs.“A once-chance syndicate that specialises in attacking women is one of the syndicates taken out. Another two-man gang that has been carrying out burglary activities in Abuja, especially Gwarimpa, have been taken out.“Another two-man gang that specialises on troubling people at ATM points is also among the criminals taken out. We believe with the clearance of these criminal gangs, Abuja residents will have a crime-free Yuletide.“A total of 184 ATM cards of different banks, and of course, bearing different names, were recovered.“We are also going after dealers on illicit drugs. This is based on our understanding of the nexus between violent crimes and illicit drugs.“Operatives also followed a lead and intercepted a gang supplying illicit drugs to both North-East and North-West.”  The post Police intercept Tramadol worth N54m, recover 184 ATM cards appeared first on Linda Ikeji Blog.
Source: http://www.lindaikejisblog.com/2019/12/police-intercept-tramadol-worth-n54m-recover-184-atm-cards.html