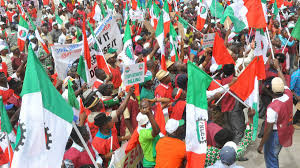 Organised Labour comprising of Trade Union Congress (TUC) and Nigeria Labour Congress (NLC) in Ogun State say they will be embarking on a two-day warning strike with effect from Thursday December 19th to push for the implementation of the N30, 000 minimum wage by the state government. The aggrieved labour unions say unless the state government invites the workers for discussion on the adjustment of the new N30,000 minimum wage on or before Wednesday this week, they will be embarking on a total strike action in the state. In a joint press statement signed by the state leaderships of both NLC and TUC, Comr Bankole Emmanuel and Comr Fajobi Olubunmi, the workers said it was very distressing that despite writing the state government five times between August and December on the need to set up the negotiation committee to determine the consequential adjustment on the new minimum wage, Governor Dapo Abiodun – led administration ignored them and failed to attend to their demand. They also refuted claims made by the state government that they have been in talks on how to implement the new minimum wage. The aggrieved workers say if by midnight on Wednesday December 18th the state government still refuses to meet with them, they would be embarking on their planned warning strike. The state government is yet to react to this development.  The post Organised labour to begin warning strike on Thursday over minimum wage appeared first on Linda Ikeji Blog.
Source: http://www.lindaikejisblog.com/2019/12/organised-labour-to-begin-warning-strike-on-thursday-over-minimum-wage-2.html