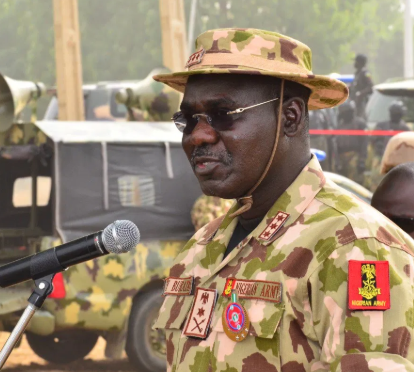 On Monday, December 16th, the Nigerian Army redeployed 20 Major-Generals and more than 10 Brigadier-Generals in a major shake-up which it said would “re-invigorate the system for greater efficiency.”   The redeployment was approved by the Chief of the Army Staff, Lt.-Gen. Tukur Buratai, and took immediate effect, according to a release by the Acting Director, Army Public Relations, Col. Sagir Musa.The Army spokesman said, “Due to the recent promotion of some senior officers, it became imperative to deploy them to appropriate appointments. Consequently, the Army has released the postings and appointments of the affected officers.  “The posting, which was approved by the Chief of Army Staff, was carried out to reinvigorate the system for greater efficiency. The highlights of the postings include: the appointment of Maj Gen E.O. Ogunkale to the Defence Headquarters as the Chief of Defence Standards and Evaluation; Maj-Gen. A.O. Uthman to Defence Headquarters as Director of Defence Communications; and Maj-Gen. O.O. Soleye to Headquarters, Command Army Record, Lokoja, Kogi State.“Others are, Maj-Gen. Y.I. Shalangwa to Defence Headquarters as Director Legal Services; Maj-Gen. D.C. Onyemulu to the Armed Forces Simulation Centre; while Maj-Gen. H.I. Bature was redeployed to the Defence Headquarters and appointed Director of Liaison.  “Similarly, Brig-Gen J.C. Ogbonna is redeployed to Headquarters, 82 Division, Enugu State, and appointed Division’s Training Officer; Brig-Gen. B.H. Mohammed to the Nigerian Military School, Zaria, as Commandant; Brig-Gen. G.O. Omorogbe to Headquarters Infantry Corps Centre, Jaji, as Chief of Staff; and Brig-Gen. A.J. Fagge to the Ministry of Defence and appointed Principal General Staff Officer to the Minister of Defence.”The post Nigerian Army redeploys 20 Major-Generals in a major shake-up appeared first on Linda Ikeji Blog.
Source: http://www.lindaikejisblog.com/2019/12/nigerian-army-redeploys-20-major-generals-in-a-major-shake-up-2.html