JR Smith’s wife cries as she prays for her husband and his alleged mistress, “The Flash” actress Candice Patton, amid cheating rumours (video) 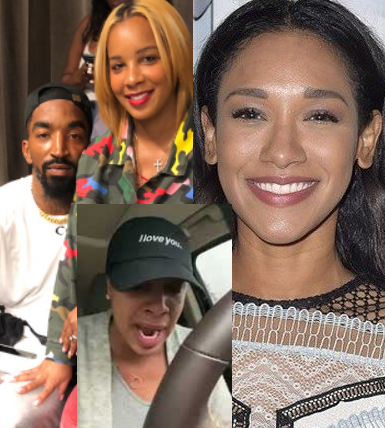 Jewel Harris Smith has reacted amid rumours that her husband NBA free agent JR Smith is having an affair with "The Flash" actress Candice Patton. Despite the fact that he’s been married to his wife Jewel Harris Smith for three years, JR Smith has allegedly been dating "The Flash" actress Candice Patton since at least October. He was reportedly on IG live the other night with Patton’s dog and allegedly made mention of their relationship in a now-deleted video.  JR's wife heard the rumours and finally decided to react as a lot of people were sending her DMs. In a video shared online, Jewel addressed the incident and went on to pray for her husband and for his alleged mistress. "It’s a battle, it’s a hurdle," Jewel said in an emotional video she uploaded to her Instagram page. "It hurts, it’s unfortunate, but it is what it is." She went on to pray for JR and her family. She prayed that God will heal JR.  "God, please help and heal my husband," Jewel prayed. She also prayed that God will  heal Candice for "seeking a married man." She prayed: "And Candice… She's hurting. I pray, Father God, for Candice that you'll just mend her heart, Father God. For her to go out here and seek a married man. Father God, I just pray that you give her grace and mercy through all of this." Watch the video below. The post JR Smith’s wife cries as she prays for her husband and his alleged mistress, “The Flash” actress Candice Patton, amid cheating rumours (video) appeared first on Linda Ikeji Blog.
Source: http://www.lindaikejisblog.com/2019/12/jr-smiths-wife-cries-as-she-prays-for-her-husband-and-his-alleged-mistress-the-flash-actress-candice-patton-amid-cheating-rumours-video.html

Previous ‘We’ve got to be ready’ – US Military says as North Korea could launch ‘long range missile’ as a Christmas gift to US’
Next Chartered Accountant who lived in US for 45 years, allegedly murdered by assasins in Ikorodu