Caucasian woman and her Nigerian husband speak to LITV about how they met, rubbish claims they married for papers (video) 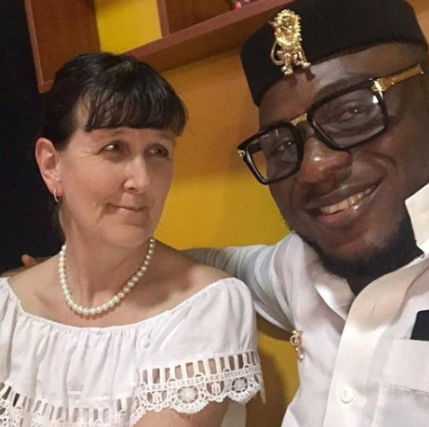 Days ago, an interracial couple's relationship was made public when sceptical Nigerians insinuated the younger Nigerian husband married the older Caucasian woman for papers (read here). The couple has now spoken to LITV to address the claims. Michael and Debby said they have been married for "16 months". Debby was born in Ireland but lives in New Zealand. Michael is from Delta state, Nigeria. The couple spoke to LITV about their relationship and the challenges they've faced. Michael said being married to Debby is the most wonderful thing that happened to him. He says it's "been fun and challenging due to cultural difference." Speaking, Debby said they've faced a lot of challenges from "Nigerians who are envious of their relationship" and also from people doubting the authenticity of their marriage and insinuating Michael married her for the "green papers". Speaking on why Nigerians are 'envious' of her relationship, Debby said it's because they want something like what she and Michael have and people get envious when they see people doing something different. When asked how she met Michael, Debby said she is a former military person, ex-royal Navy, where she served as an aeronautical engineer for 13 years. She added that the Navy has an "external website for Maritime and that's basically how we connected." "I was helping to do administration on this maritime website and Michael became a member and was asking a lot of questions about the Maritime industry, about Naval, because he was very interested in that type of thing. He was also serving as a maritime person as well. And so the connection came and then we started to chat off the business level." At the time they moved from a business relationship to a romantic one, they hadn't met in person. "I'd just seen a photo," Debby said. When asked if she wasn't sceptical because of the notion that Nigerian men are after Caucasian women to swindle them of their fortune, she said: "I was initially, but I'm sort of very intelligent on that aspect and my view was, I just basically said to him, 'if you're going to try and scam me and steal all my money, I'll just kill you'." Debby and Michael both laughed at this point in the interview. Debby added: "I put it out there right from the beginning." Michael adds affectionately: "You can't kill me now." And Debby responds, "I can kill myself." "If you kill yourself, you kill us," Michael replies. Watch their interview below.     The post Caucasian woman and her Nigerian husband speak to LITV about how they met, rubbish claims they married for papers (video) appeared first on Linda Ikeji Blog.
Source: http://www.lindaikejisblog.com/2019/12/caucasian-woman-and-her-nigerian-husband-speak-to-litv-about-how-they-met-rubbish-claims-they-married-for-papers-video.html

Previous Pelosi withhold impeachment articles against Trump, delays Senate Trial
Next White House reacts to President Trump’s impeachment, describes it as ‘the most shameful political episodeÂ in US history’