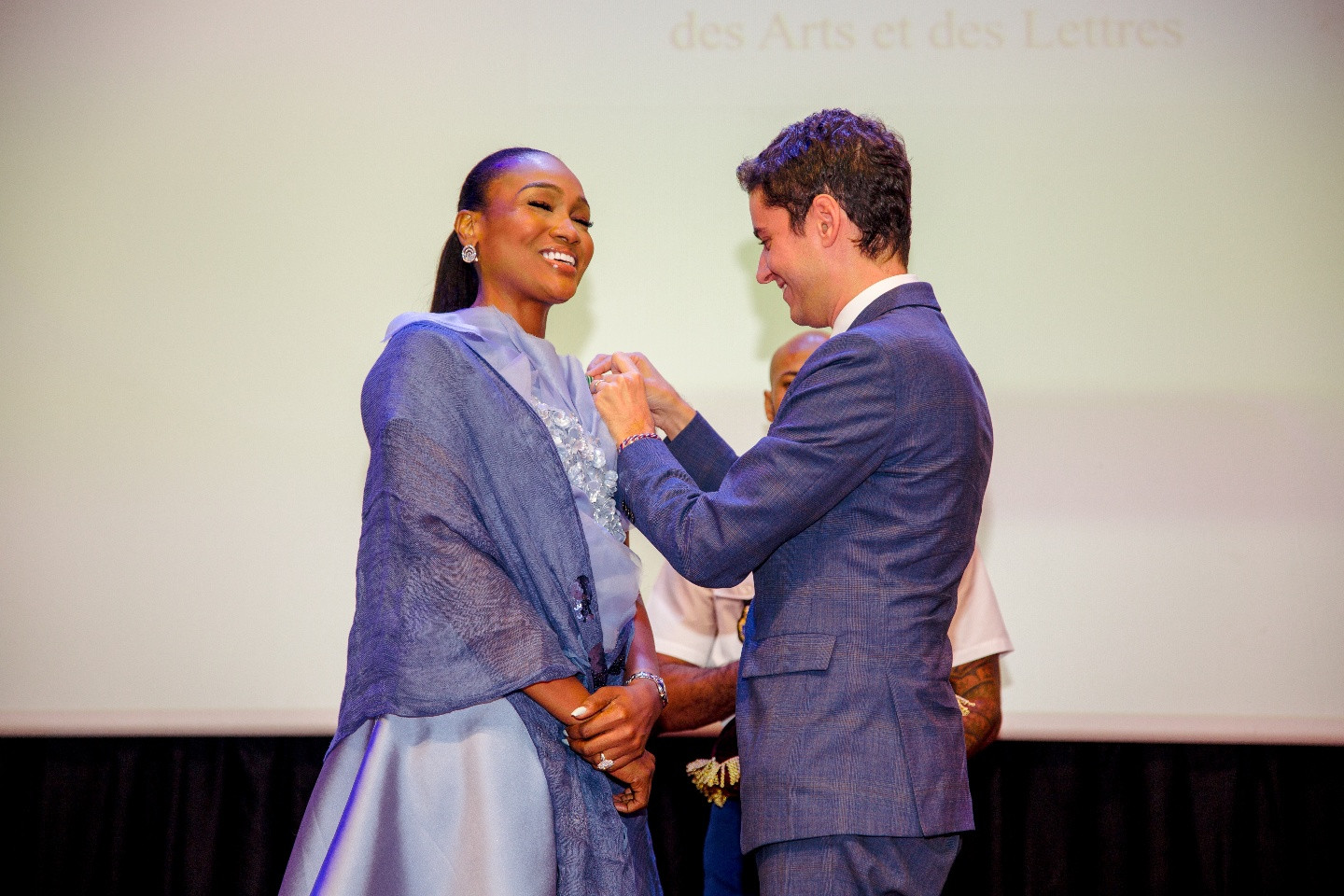 Right: French Minister, Gabriel Attal, decorates Globacom's Executive Vice Chairman, Mrs Bella Disu with the medal of the prestigious French national honour of “Chevalier dans l’ordre des Arts et des Lettres”. The event took place at Alliance Francaise Mike Adenuga Centre, Ikoyi, recently. Globacom’s Executive Vice Chairman, Mrs. Bella Disu, has been awarded the French national honour of “Chevalier dans l’ordre des Arts et des Lettres” (Knight in the Order of Arts and Letters).Mrs. Disu got the award on Friday for her support for arts and culture. She was responsible for the coordination of the construction of the impressive Alliance Francaise Mike Adenuga Centre, Ikoyi, Lagos, which has since been opened to the public.Conferring the honour on Mrs. Disu at a colourful ceremony held at the Centre, the French State Secretary for Education and Youth Ministry, Minister Gabriel Attal, described Mrs Disu as one of the youngest recipients of the French national honour.The Minister said the national honour is reserved for icons who have supported the sustenance and growth of French culture.He described the Mike Adenuga Centre as magnificent and the most beautiful of all Alliance Francaise centres in the world. He also described the equipment, sound, lighting and technology at the Centre as first class, adding that the project is a cultural revolution.The minister commended the Chairman of the Mike Adenuga Group, Dr. Mike  Adenuga Jr.,  who was present at the award for the excellent work done, asking, "Who could have imagined that it was possible to build such a cultural centre in just a few months?”The minister said, "We owe this exceptional project to you Chairman, who financed it, as much as to Bella who brought it to life," he said.Also attesting to the sterling qualities of Mrs. Disu, Charles Courdent, Director, Alliance Francaise Lagos, said the Centre was proud of Mrs. Bella Disu's uncommon hardwork, adding that "the vision of Globacom Chairman, Dr. Mike Adenuga has been fully accomplished by his daughter in this project."In her acceptance speech, Mrs Disu expressed gratitude to President Emmanuel Macron of France for the honour. She also thanked her supportive husband, Mr. Jameel Disu, family, friends and all members of the Mike Adenuga Centre project team, particularly the Director who set an audacious vision for the Centre. She said the honour had shown her that when you are dedicated and passionate the reward would come sooner than imagined.“It's been a journey to this honour, but I have not come this far alone. I’d like to thank those who have made it easier for me to stand firm and stand strong on this stage. This award is as much for you. I’d like to thank my father, Dr. Mike Adenuga Jr. Thank you, daddy, for your support and for the platform you have given me. Your magnanimity and heart for society continually inspires me".Mrs. Disu is also the CEO of Cobblestone Properties and Estates, Director at Abumet PLC and non-executive director with Julius Berger. She has also been a distinctive benefactor of the Musical Society of Nigeria (MUSON) to encourage a better environment for musical learning.The post Bella Disu bags French eminent national honour appeared first on Linda Ikeji Blog.
Source: http://www.lindaikejisblog.com/2019/12/bella-disu-bags-french-eminent-national-honour.html