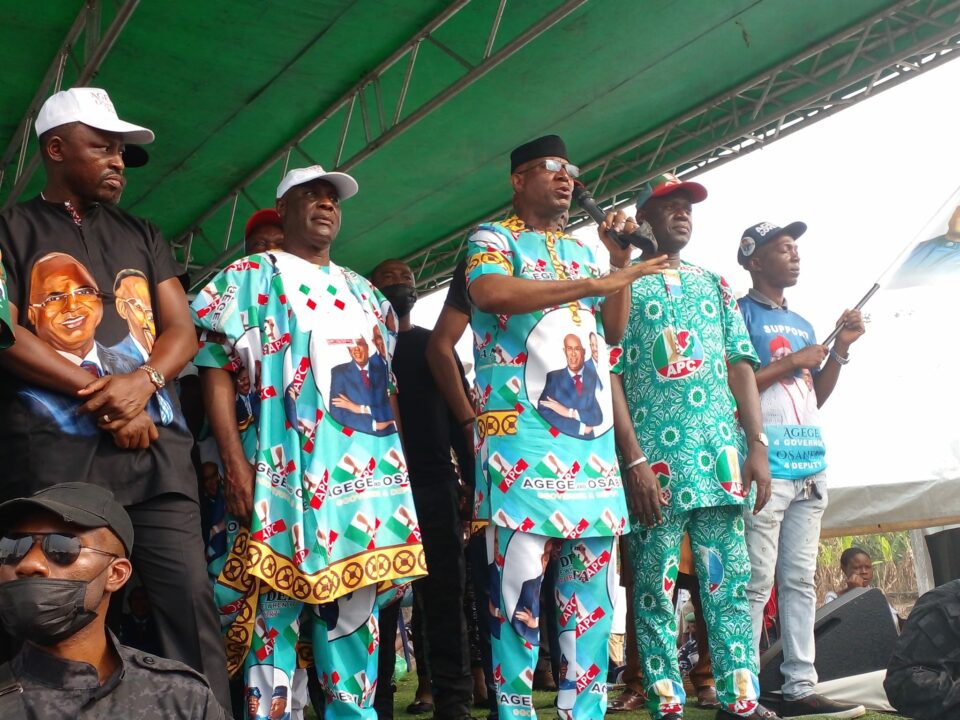 Ahead of the general elections, the governorship candidate of the All Progressives Congress (APC) in Delta State, Senator Ovie Omo-Agege, has promised to covert the famous Sapele Technical College (STC), Amukpe, to a polytechnic if he becomes the next governor of the state.

Omo-Agege, Deputy President of the Senate, also assured that an APC-led government in the state will end the incessant killings in Sapele town.

He spoke on Tuesday during the continuation of APC ward-to-ward campaign train to Amukpe, Sapele main town, Ugborhien and Deighele-Elume in Sapele local government area of the state.

Speaking at the various wards visited, Omo-Agege noted that Okpe Kingdom as a critical stakeholder and major contributor to the revenue of the state deserves a tertiary institution like other parts of Delta.

The Delta Central lawmaker explained that aside upgrade of the Sapele Technical College, his administration will also establish tertiary institutions in Itsekiri and Ijaw areas of the state to bring education closer to the people.

Berating Okowa and Rt. Hon. Sheriff Oborevwori, Speaker of the State House of Assembly, for the underdevelopment of Okpe Kingdom especially Sapele local government area, the Deputy President of the Senate said his government will ensure Sapele and other parts of the state get their own share of development.

Omo-Agege appealed to the people of Sapele council to en masse for Asiwaju Bola Tinubu as next Nigerian President and other APC candidates, assuring that he would work with the former Lagos governor to revamp the ailing Sapele, Warri, Burutu and Koko seaports in the state.

“That NDDC Road that was abandoned just like Rt. Hon. Monday Igbuya has said, when I leave here, I will call NDDC to ensure that the contractor return to site and ensure that road is completed.

“If you look round Sapele and Okpe of Okpe Kingdom, this is about the only sub-ethnic nationality that doesn’t have a tertiary institution. I am committing to you today, this Sapele Technical College (STC) we are going to convert it to a Polytechnic.

“Senator Dafinone brought Sapele seaport, and the good thing is that we are going to have another Dafinone partnering with me and partnering with Asiwaju Bola Ahmed Tinubu as our next president to reactivate the Sapele Port”, Omo-Agege said.

The APC governorship candidate further noted that Tinubu, the APC presidential candidate as President, was determined turning Delta into economic hub of the South-South geopolitical zone.

Omo-Agege added, “Tinubu wants to boost commerce in Delta State. Tinubu is determined that Delta State becomes economic hub. Asaba is our state Capital. Asaba will be developed as our capital. Warri, Effurun, Udu and their environs are the ‘economic hubs’ – the economic nerve centres of the state.

“We need proper partnership. See once you have a proper alignment between the State Government and the Federal Government, whatever you want you will get. When I become Governor and Bola Ahmed Tinubu Becomes President, both APC, all these things will be easy for us.”

Meanwhile, Deputy governorship candidate of the APC and former Deputy Speaker of the State House of Assembly, Rt. Hon. Friday Osanebi, has assured that the incoming administration of APC will end incessant killing of youths in Sapele main town.

Osanebi, who lamented the frequent rival cult clashes in the seaport town, urged youths in the area to embrace peace, stressing that with Omo-Agege as governor, youths in the state will be too busy to be fighting themselves.

He charged youths in the state to support APC in the forthcoming elections, adding that Omo-Agege-led government will be youth and women based through various empowerment policies.

Several Sapele leaders who spoke at the campaign rally including former speaker of the State House of Assembly, Rt. Hon. Monday Igbuya; APC senatorial candidate, Chief Ede Dafinone; former Chief of Staff in the state, Chief Paulinus Akpeki, Mr. Moses Ogodo and other chieftains of the party in Sapele assured Omo-Agege and Tinubu that APC will win all the elections in the council.

The campaign also witnessed thousands of PDP members dumping the party for the APC during the various wards visited.