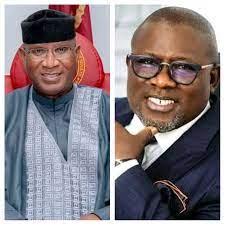 An APC chieftain in Delta State and the former Chief of Staff to Governor Emmanuel Uduaghan, Chief Paulinus Akpeki, has said that the governorship candidate of the Peoples Democratic Party (PDP) and Speaker of the State House of Assembly, Rt. Hon. Sheriff Oborevwori, is not paternally from Okpe Kingdom as erroneously believed in some quarters.

Akpeki, who is the Delta Central Senatorial District’s chairman of the All Progressives Congress (APC), stated that Oborevwori is only maternally from Okpe Kingdom just like the governorship candidate of the APC and Deputy President of the Senate, Senator Ovie Omo-Agege.

He also challenged Oborevwori and candidates of the PDP to a debate with Omo-Agege and APC candidates ahead of the 2023 elections in Delta State.

Akpeki spoke on Wednesday during the inauguration of the APC Delta Central Senatorial Campaign Council of Chief Ede Dafinone in Ughelli, stressing that Omo-Agege will succeed Governor Ifeanyi Okowa as next governor of Delta.

The former Delta Housing Commissioner also stated that Dafinone will succeed Senator Omo-Agege as the next senator representing Delta Central at the National Assembly.

He added that Okpe’s sons and daughters are solidly behind Senator Omo-Agege and Dafinone and would massively vote for them in the next year’s elections.

Speaking on the chances of Dafinone in next year’s election, Akpeki posited, “Today, Ovie Omo-Agege sits down and he is comfortable that someone is going to take over from him. Omo-Agege has done well and we are bringing somebody that can step into his shoes. Ede Dafinone will do well stepping into Omo-Agege’s shoes in the Senate.

“Let Delta people choose. The position of the governor is for Delta Central in the next dispensation. Let the two candidates contesting for Senate tender their documents, certificates and profiles to Deltans. Let Deltans choose also.”

In his speech, APC Delta Central senatorial candidate, Okakuro Dafinone charged the people of Delta Central to massively vote for APC candidates in the forthcoming elections, adding that the party will convincingly.

Dafinone, while commending Senator Omo-Agege for elevating the Delta Central seat at the National Assembly through his performance, called on Deltans to support and vote for the APC governorship candidate in the forthcoming elections.

He charged the campaign council members to return their units and wards and mobilise the people of Delta Central and Delta State to vote for all APC candidates across board.

“2023 is the election that our votes will count and won through unit by unit. Our event here today is directed at localising our politics. I started politics in 1998 in PDP and in 2006 in contested for the position of the Senate but lost in the primaries.

“With the APC, I have found my home. The party is united and we have formed a formidable party. A Party that is positioned to take over Delta State come 2023. We owe this to our leaders and I want to thank DSP Senator Ovie Omo-Agege and other leaders of the party who have driven the process to where we are today.

“We are much stronger today in the party than ever. Our chances of winning the state from Presidency to governor, senatorial to House of Representatives and State Assembly in Delta State are incredibly bright.

“Today, I’m a politician and I am proud to be. This election will attract more people to APC because they see us as the winning team. We’re reaching out to people that are not currently our members. It’s a way of attracting them to join our fold.

“We will continue that process with the faith that many more are coming to join us as leaders and builders of Delta State come 2023. Anyone who wants to be in our campaign team will be accommodated”, he added.

Also speaking at the inauguration of the campaign council, the member representing Ughelli North, Ughelli South and Udu Federal Constituency at the House of Representatives, Rev. Francis Ejiroghene Waive charged council members to intensify mobilisation for the party’s victory.

Waive posited that APC will win Delta State in the 2023 elections convincingly, adding that Dafinone has the capacity to build on the achievements of Senator Omo-Agege at the National Assembly.