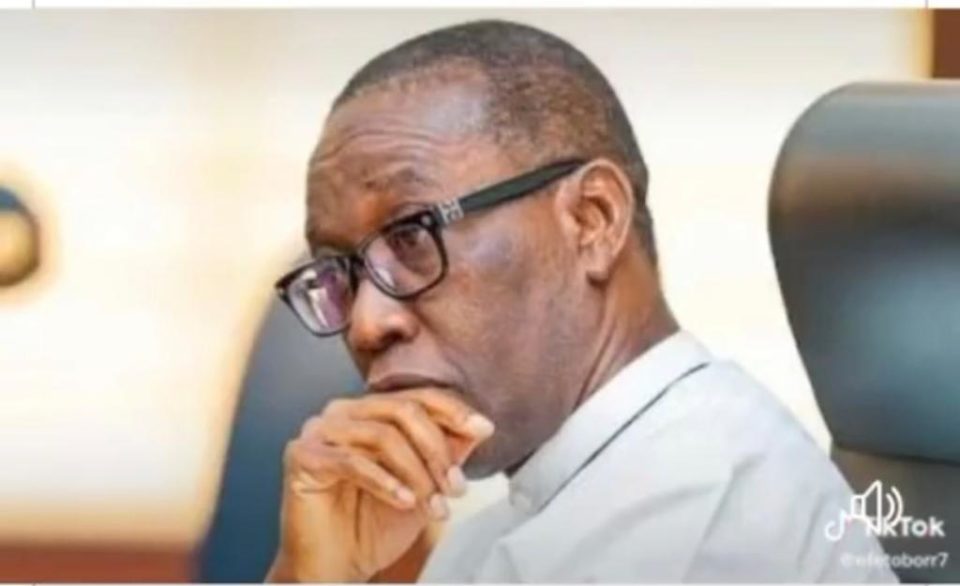 On an Arise TV video that’s gone viral, Delta State governor, Dr. Ifeanyi Okowa, dorns a fashionable suit whose top buttons the average pensioner, the pensions of whom he ignored until the Deputy Senate President, Senator Ovie Omo-Agege, called him out, definitely cannot afford. In the video, he makes spurious, unfounded and unverifiable claims that he has restored the peace in the riverine areas of Delta, and has brought immense development to its people — just how?

How can’t anyone be beside themselves with indignation at the baleful, malicious and perfidious lies Okowa tells from the lowest pits of hell to the public! The fact is that the PDP government of Okowa has undeveloped and marginalized the oil-rich state of Delta. The government has managed it into a failing and functionless mess, where stadiums collapse on people and lives are taken in a Hobbesian state of anomie.

Part of the Stephen Keshi Township Stadium collapsed on Thursday. Today, Sunday, the other part caught fire. And this is how in Delta, people die avoidable deaths and are constantly displaced: whether by natural means or man-made tragedy.

Delta is all crises from the north to central and the south senatorial districts. There is little or no succour from the government of PDP to internally displaced persons, yet Okowa frolics from state to state, spending Delta state money on an ill-fated vice presidential campaign.

In his viral Arise TV video, he claims to have recreated the economy of the riverine areas and built infrastructures all over Delta. He even once dubbed himself “Roadmaster”, only recently dialling down on that perfidious title when confronted with the road infrastructure mess that is Delta by another name.

In our state, there’s no evidence of development. What actually obtains everywhere is the destruction of its legacies, of institutions and agencies that used to be a source of succour for our people.

The Delta State Oil Producing Areas Development Commission, DESOPADEC, was once a vibrant commission that made a difference in its moment. DESOPADEC was Delta’s NDDC, vibrant, building roads and bridges, bringing help and hope to our people in the oil-producing areas.

Today the DESOPADEC cannot even pay the regular students’ bursaries not to speak of carrying out projects. It has been rendered so functionless by Okowa and his friends that they only scrape by, basically just paying staff salaries.

All Deltans are aware that the Direct Labor Agency, DLA, in the state is dead, yet Okowa still allocated a budget of N1.2 billion to this agency. What for if not as a pork barrel for himself and his co-travellers in the PDP? The multi-billion naira DLA was once the agency that fixed bad roads and rushed help to people in areas cut off suddenly by flooded and washed-off roads, as is more and more common in Okowa’s Hobbesian Delta. Today, DLA is as dead as dodo!

What about the age-old, a time honoured Rural Development Agency, RDA? The fathers of the state realized from the beginning that due to the difficult terrain, bringing development to the hinterlands needed creative thinking. The RDA, therefore, was the vehicle to open up the rural areas and bring government presence to our people. Today, it is also deader than dead in a testament to Okowa’s Delta where rural development is only on Arise TV, and not in the creeks and bush paths of our sad state.

The same can be said of other services that are going down by the hour such as Delta Line and the Asaba Airport both allegedly sold off to cronies.

The controversial planned N3.5 billion Events Center is being considered a private project of the Okowas, in view of allegations that the government awarded the contract to one of the governor’s relatives. All the catering in the N12 billion State Secretariat complex whose award was also mired in controversy, is allegedly in the hands of Okowa’s blood sister, raking in hundreds of millions yearly into the Okowa family pocket.

This is but the tip of the iceberg of how Okowa has run Delta, a state thrashing about for freedom from the asphyxiating bear hug of the governor’s family, acolytes and friends.

Obviously, everything Okowa touches turn to rust. His is an “unMidas” touch. Even their PDP. Today it is torn right down the middle, which is probably the only good thing Okowa has done for Deltans.

We challenge Okowa, who has made a career of burning bridges to provide evidence of his positive impact on the oil-producing areas of Delta State as he claimed on Arise TV.
Is it the same creeks and rural areas where poverty, death and disease stalk the lands and waterways; where the majority of the youths he claimed to have empowered roam the streets dazed by deprivation, hunger and unemployment; youths that have become even more restive and restless in dire frustration?

The fact is that Okowa cannot claim to have empowered anyone in Delta, except his immediate family and his friends in the crumbling Delta PDP of the torn umbrella.

As Deltans, we say enough is enough of Okowa, the PDP, gross underdevelopment, stark poverty and unprecedented backwardness of Delta state.

Olugua is a member of the Delta APC Campaign Organization.